CARACAS (AFP) - Venezuela's Supreme Court declared the leadership of the opposition-controlled National Assembly illegitimate and its decisions "void" Monday (Jan 21) after it repudiated the presidency of Nicolas Maduro.

The latest escalation in the power struggle between Maduro and the new president of the assembly, Juan Guaido, came on the same day as a brief military uprising in Caracas and amid opposition calls for mass protests on Wednesday.

Supreme Court president Juan Jose Mendoza read a statement to the press declaring that the legislature "does not have a legitimate board of directors".

He charged that it was "usurping its authority, and therefore all its decisions are void."

Hours earlier, the government said it arrested a group of mutinous soldiers who attacked a National Guard command center in Caracas.

The soldiers had managed to post a video on social media announcing their repudiation of Maduro's regime and calling on the public to take to the streets in support.

Guaido, on being sworn in as the assembly president earlier in the month, called on the military and the public to support a transitional government to restore democracy after declaring Maduro's presidency illegitimate. 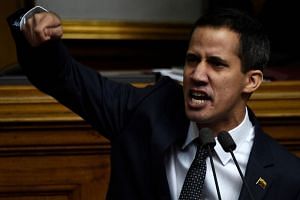 Last week, the assembly formally declared Maduro a "usurper" and promised members of the military and civilian officials who break with his regime amnesty.

Maduro, a socialist, was sworn in to a second six year term January 10 amid criticism from his domestic opponents and international bodies such as the European Union, Organization of American States and the United States.

Maduro's critics charge the May election he won was fraudulent.

The Supreme Court stripped the legislature of all its powers in 2017, soon after Maduro lost control of the National Assembly following parliamentary elections.

Although the opposition-controlled assembly continues to sit and make decisions, those are all annulled by the loyalist-dominated Supreme Court.

Guaido has announced a mass people's protest for Wednesday and admits that he needs both the public and military on his side to unseat Maduro.