The police had asked for his wife, who was at home with their 20-month old daughter while he was out at an event, said Mr Guaido.

"I will hold you responsible for any threat to my baby," he said at the end of a public event in Caracas.

Mr Guaido, the 35-year-old leader of the National Assembly, then left for home, asking diplomats to accompany him.

The United States, which backs Mr Guaido, has warned of "serious consequences" if Mr Maduro's government harms him.

Mr Guaido later appeared at his building with his wife and daughter, saying "they will not intimidate this family".

Neighbours said men who identified themselves as belonging to the Special Actions Forces arrived at the gate of his apartment building in a white SUV. There was no obvious police presence by the time journalists arrived at Mr Guaido's house.

The political fight between Mr Maduro, sworn in for a second term this month, and Mr Guaido, who declared himself interim president last week, has drawn in foreign powers.

On one side of the tussle for control of Venezuela - an Opec member with the world's largest oil reserves but in dire financial straits - Mr Guaido and Western backers led by the United States are insisting on an immediate transition and fresh elections.

On the other, Mr Maduro, with backing from Russia, China and Turkey, says he will remain for his second six-year term despite accusations of fraud in his re-election last year and the economic meltdown.

He has accused the opposition of attempting a US-backed coup.

Mr Maduro, who first took office in 2013, has faced waves of protests in recent years as he presided over the collapse of the economy, with hyperinflation and chronic food shortages. Some three million Venezuelans have left the country.

As it seeks to shore up support for Mr Guaido, the administration of US President Donald Trump imposed sanctions on state-run oil firm PDVSA on Monday, aimed at severely curbing Venezuela's crucial crude exports.

"Coercion, whether military or economic, must never be used to seek a change in government in a sovereign state," said Mr Idriss Jazairy, a UN special rapporteur studying the negative impact of sanctions.

"The use of sanctions by outside powers to overthrow an elected government is in violation of all norms of international law," he said in a statement in Geneva. 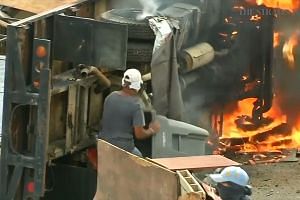 The group, which will include Britain, France, Germany, Bolivia and Ecuador, will end after 90 days if no progress is made, and stands ready to consider more economic sanctions on Mr Maduro's government.

"We have targeted sanctions in place and further... sanctions might be considered by the ministers," Ms Mogherini, the EU's top diplomat, told reporters after a meeting of EU foreign ministers in Bucharest.

Earlier, the European Parliament recognised Mr Guaido as de facto head of state, a largely symbolic move. But lawmakers urged the EU's 28 governments to consider him "the only legitimate interim president" until there were "new free, transparent and credible presidential elections".

In the tussle over oil, Mr Guaido worked this week with Washington to wrest control of PDVSA's US subsidiary Citgo from its board. Citgo and Mr Maduro's government responded by ordering dozens of Citgo's expatriate staff in the United States to return to Caracas by the end of February, people familiar with the matter said.

PDVSA has said it will pursue legal efforts to block a Citgo takeover.

Oil production in Venezuela continued to decline in January, according to a Reuters survey. The country's oil output fell to 1.17 million barrels a day, down from 1.2 million bpd.

The country's ports are becoming bottlenecked, with about 25 tankers holding about 18 million barrels of crude oil - more than two weeks of the country's production - off the coast.

US sanctions prevent buyers such as Valero and Chevron from paying for oil into accounts that can be accessed by Mr Maduro, leaving the tankers stranded.

PDVSA is also unable to pay for gasoline and other fuels that it is trying to import for domestic use or to blend with its heavy crude to make it marketable for global sale. That, too, is adding to the tanker traffic.