BOGOTA (REUTERS) - A staggering 1.2 million Venezuelans have fled to Colombia.

The country had, until recently, sought to avoid setting up camps to house these migrants in fear they may attract more, and slow down integration into Colombian society.

But a surge of migrants in the historically poor town of Maicao forced the local government to reach out to the United Nations, who set up a 60-tent camp - a temporary respite for beleaguered Venezuelan migrants fleeing their home where hyperinflation has put basic food and medicine beyond reach.

Ms Moreno and her six children fled a month ago, and are allowed to stay for six weeks at this camp.

"I've come (here) because I told my husband that I couldn't take the situation anymore. It's hard, you can't tolerate it. You know it's hard when your son says, 'mum, I'm hungry', and there is not even salt water to give him," she added.

The camp, the only one of its kind in Colombia, opened in March. 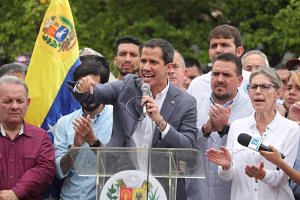 US' Mike Pompeo tells Venezuelans: 'The time for transition is now'

The UN estimates that roughly a quarter of the country's 30 million people need humanitarian assistance.

It's not home, but Ms Denire Sierra, who is 38 weeks pregnant, says it is still better than the alternative.

"I feel better (at the camp) than being out on the street. I'm safer, I have food, I don't have to be under the sun," she said.

Colombian and UN officials take pains to emphasise that the Maicao camp is temporary - an attempt to give the most vulnerable migrants housing while they prepare to continue their journey to other parts of Colombia or get jobs. But officials say it will remain open as long as it is needed and can be funded.