CARACAS (AFP) - President Nicolas Maduro welcomed on Friday (May 17) the "beginning of talks" with the Venezuelan opposition in Norway, after months of bloody clashes between the two sides.

"The talks have begun nicely to move towards agreements of peace, agreement and harmony, and I ask for the support of all Venezuelan people to advance on the path of peace," Mr Maduro said in a declaration at a ceremony in front of 6,500 troops in the northern state of Aragua.

Confronted with the worst socio-economic crisis in the oil-producing country's recent history, the socialist leader added that "Venezuela has to process its conflicts" and seek solutions "by way of peace".

He declared the "beginning and exploration of conversations and dialogues" with the opposition.

Mr Maduro's depiction of the talks was at odds with opposition leader Juan Guaido who on Thursday (May 16) denied they were underway.

"There is no negotiation whatsoever," Mr Guaido made clear in comments to reporters. Instead, Norwegian officials were "trying to mediate" with both sides to bring them to the table. 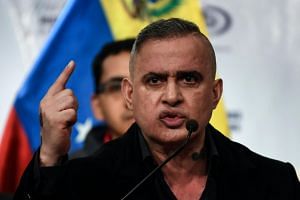 US orders suspension of flights between the US and Venezuela

Mr Maduro hailed the "good news" hours after Norway reported on preliminary contacts between the parties.

Earlier, foreign minister Jorge Arreaza gave the first official confirmation from Caracas of its involvement in what Norway referred to as exploratory discussions in Oslo.

The mediation bid comes after a months-long power struggle between National Assembly leader Guaido and the socialist president, with sometimes deadly street clashes.

Mr Maduro on Thursday made no direct reference to the meetings, but said Mr Rodriguez was "on a very important mission for peace in the country... in Europe."

So far, details of the exact process underway in Oslo have been scant.

'It's time to rise up,' Venezuelan general tells military officers in video

Deputy of Venezuela's Guaido arrested and dragged away by tow truck

Norway's foreign ministry said in a statement it had made "preliminary contacts with representatives of the main political actors of Venezuela". These were "part of an exploratory phase, with the aim of contributing to finding a solution to the situation in the country", it added.

The opposition said it was being represented by National Assembly vice president Stalin Gonzalez and former lawmaker Gerardo Blyde.

US-backed Guaido is recognised by dozens of countries as interim president after dismissing Mr Maduro's presidency as "illegitimate" following his re-election last year in polls widely dismissed as rigged.

Mr Maduro has been shunned by much of the international community for presiding over the country's economic collapse, which has led to shortages of basic goods - forcing millions to flee - as well as brutally suppressing dissent.

He retains the backing of major creditors Russia, China and Cuba, as well as the powerful military.

Shortages of basic goods have forced millions to flee Venezuela.