CARACAS (WASHINGTON POST) - Venezuelans took to the streets for lunch-hour protests on Wednesday (Jan 30), forming pockets of resistance outside military bases and on main streets across the country as the opposition movement seeks to force embattled President Nicolas Maduro to hand over power to an interim government.

Mr Juan Guaido, who declared himself Venezuela's interim president last week and won backing from most Western governments, convened the protest and appeared as the demonstrations were wrapping up in Caracas' Central University.

Late Wednesday afternoon, United States President Donald Trump tweeted that he had spoken with Mr Guaido that day to "congratulate him on his historic assumption of the presidency" and to reinforce "strong United States support for Venezuela's fight to regain its democracy".

Trump concluded with: "The fight for freedom has begun!"

Mr Maduro has sought to neutralise Mr Guaido by ordering him not to leave the country and freezing his assets. The government has also responded to his challenge by cracking down on rebellious neighbourhoods, trying to preserve an autocratic, socialist-style system increasingly imperilled by deep unpopularity and foreign pressure.

In an interview with Russia's RIA Novosti news agency that aired on Wednesday, Mr Maduro said he has sent letters to the governments of Bolivia, Mexico, Russia and Uruguay to involve them in a new process of dialogue with the opposition.

Russia, which has been Mr Maduro's most vocal international supporter and is a major investor in Venezuela, applauded his willingness to negotiate.

"The fact that President Maduro is open to dialogue with the opposition deserves high praise," Kremlin spokesman Dmitry Peskov told reporters in a phone call. 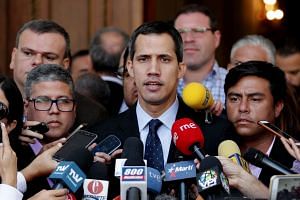 Mr Guaido did not respond to the dialogue offer, which drew a tweet from Mr Trump, who said Mr Maduro's move came only after increased US pressure on the Venezuelan government and economy.

The reactions highlighted how the fight for power in the South American country has taken on the overtones of a superpower rivalry.

On Wednesday, Mr Maduro also issued a video message directed at the American people, asserting that the Trump administration is trying to carry out a coup d'etat in Venezuela that he said would be disastrous.

The US wants "to put their hands on our oil like they did in Iraq, like they did in Libya", Mr Maduro added. "I ask for the support of the people of the United States so that there is not a new Vietnam," he said in the video posted on Facebook.

The anti-Maduro protests on Wednesday were far smaller than the massive outpouring over the weekend, and the government repression in recent days may have discouraged a broader attendance.

Over the past week, 35 people have died in protests - most shot by security forces as they took part in late-night pot-banging demonstrations in slums, according to the Venezuelan Observatory of Social Conflict. More than 800 people have been detained, according to the legal aid group Foro Penal.

After waves of daily protests in recent years failed to dislodge Mr Maduro, the opposition has adopted a different strategy, said opposition leader and lawmaker Juan Andres Mejia, which is to demonstrate the will to protest without raising expectations among supporters or provoking the government into a violent response.

"The government is avoiding images of strong repression in Caracas, and focusing on cracking down on slums," he added. "But the result is that the rates at which the death toll and number of detained are rising is higher" than in past years.

A larger protest is planned for this Saturday.

The Trump administration is leading an international campaign to drive the leftist Venezuelan leader from power, embracing Mr Guaido's arguments that Mr Maduro began a second term after an election riddled with fraud and years of authoritarian rule that have plunged this oil-rich country into an economic and humanitarian catastrophe.

Mr Elliott Abrams, the State Department's newly appointed envoy for Venezuela, said the crisis appears to have exacerbated divisions within the Venezuelan military. Top commanders have enriched themselves, but the rank and file are suffering like most other Venezuelans, he said.

The senior officials "are actually quite nervous about the mood" in the country. "Our hope is that, in what we believe will be the final period of the regime, it does not use violence to try to prolong its days in power," Mr Abrams said. "We hope that if it comes to it, the Venezuelans, in the military, in the society, will turn away from violence. The only people willing die for Maduro are the Cubans who are his security guards."

Meanwhile, Mr Abrams said, the US and other countries opposed to Mr Maduro are scouring the world looking for assets that can be seized under US sanctions announced this week.

Mr Maduro and his supporters have waved away the European Union's demand that he accept presidential elections by this weekend or the EU would recognise Mr Guaido as president.

One of Mr Maduro's most prominent supporters, Mr Diosdado Cabello, said in a speech on Wednesday that the only elections the government is considering are for National Assembly, currently the only opposition-controlled body in Venezuela. "Militia members, members of the police and the armed forces, wherever we have to mobilise to defend the homeland, we will," Mr Cabello said.

In Caracas, residents expressed frustration with the government, but some were wary about joining protests because of possible violence.

Outside the José Manuel de los Rios Hospital in north-west Caracas, about 100 employees filled the street, chanting and waving signs, as dozens of police officers looked on. "I'm here because I'm in a hospital where my patients are dying. We have nothing," said 26-year-old radiology technician Haberlyn Mejia. "I hope there's a profound change in my country. We need it urgently."

Mr Rafael Tafuro, 65, a carpenter who was waiting for the subway in eastern Caracas on Wednesday morning, said that "of course" he would take part in the demonstrations. "I protest because of everything. I haven't had work in a year. I'm a carpenter. Materials are way too expensive, and no one has money to pay for my services."

But Mr Lasmick Valverde, a 19-year-old accounting student, said he would not join the demonstrations. "I'm too scared something will happen to me," he said. "I support what they're doing, but I don't like protests."