CARACAS (AFP) - Plastic bottles and containers at the ready, Ms Keisy Perez ignores the stench from the brown river as it slips slowly through the grimy San Agustin district of Venezuela's capital.

The quest for drinkable water has rapidly become an obsession for millions like her in Caracas, days after a crippling power blackout stalled the city's pumps.

In this part of Caracas, the Guaire river is effectively an open sewer.

The crisis has led many to seek water in places they would previously not dream of going. People here are undeterred.

A burst water main has brought a feverish crowd, equipped with every kind of plastic container they can find.

The water courses through an underground culvert to emerge as a stream. In their desperation, they are content to ignore its proximity to the murky river.

In their rush, some slipped down the bank and into the river.

For Ms Perez, it's just another indignity of Venezuela's crisis.

"We came to get water and I fell in. And look, it didn't kill me," she said cheerily.

But she can't hide her exasperation after days without electricity or running water following years of food and medicine shortages.

"Are they waiting for us to die?" she asks.

"We have no water and nothing to drink," Mr Marcel Galindez told AFP as he filled a 20-litre container.

"We'll have to boil it," he said, looking doubtfully at the contents.

Alongside him, a girl washed her hair.

"This has been going on for a long time," said Mr Omar Feralines, a local resident. "But they discovered this, and we've come to get some for the bathroom, for the children."

"We can boil it, we can even drink it. What else are we going to do?"

To get at the stream means getting close to the fetid river. "But just thinking about getting into that river, you have to think about it like three times," said Mr Eduardo Escalona.

"It's crazy. People are desperate," sighed the 43-year-old, looking at the crowd around the canal.

Every day of the blackout has brought more people to take a chance on the water from the burst pipeline.

But then, soldiers deployed and ordered them to move on so workmen could fix the pipe.

An angry crowd of around 300 people blocked the road on Monday. 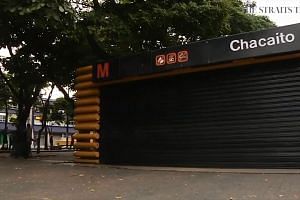 "They're not letting us get water," said Carlos, a local resident.

"We are thirsty," the crowd yelled at security forces. "We need water for our kids."

At Los Caobos park in the centre of Caracas, a woman arrived with a bag of laundry at one of the ornamental fountains, where hundreds of people had come to fill their containers and bottles.

"We're managing... tomorrow I'll come back to wash the sheets and towels in the fountain," said the woman, who declined to be identified.

Hundreds of people were trying their luck on the northern outskirts, at the foot of Mount Avila, which separates Caracas from the Caribbean.

There they wait every day in long lines to take turns to fill their containers from the trickles emerging from the wooded slopes.

All the scampering around for water is too much for Ms Yulimar, who sinks down in despair.

"I have nothing to feed my children," she says.

On Saturday (March 9), the socialist government of President Nicolas Maduro announced an emergency plan to distribute food and water to the poorest neighbourhoods and the distribution began on Monday.

Riot police uses shields to corral lines of people as they waited to fill up from tankers in several neighbourhoods.

But Ms Keisy, still waiting for a water delivery, said she had received nothing from the social government's subsidised food programme for weeks.

"Maduro talks, but we don't see anything. We're hungry here, nobody gets anything, whether they are Chavists or opposition."