Fujimori, 80, had been cleared of convictions for human rights abuses by former President Pedro Pablo Kuczynski on Christmas Eve, three days after Kuczynski narrowly survived an impeachment vote with the help of Fujimori's supporters.

News cameras waited outside the sprawling house in Lima where Fujimori has been living since becoming a free man, less than halfway into a 25-year sentence for commanding death squads that massacred civilians under his 1990-2000 right-wing government.

Fujimori's lawyer and his daughter, opposition leader Keiko Fujimori, said in broadcast comments that Fujimori would appeal the decision.

Kuczynski had cited Fujimori's ailing health for the pardon, saying he did not want a former president to die in prison.

But the pardon has been widely seen as part of a political deal and the family members of the victims of the death squad killings argued it had been granted illegally. 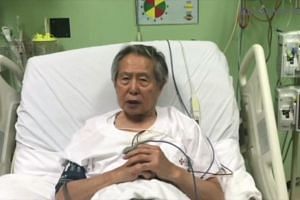 Kuczynski, who turned 80 on Wednesday, resigned due to a graft scandal in March and is now under investigation by public prosecutors in connection with Fujimori's pardon.

Alejandro Aguinaga, Fujimori's doctor, said on local broadcaster Canal N that Fujimori was at home but could not move because of a cardiac problem.