“At this moment we can announce with total certainty that we have won the presidency,” the 37-year-old Bukele told supporters.

A few minutes before his declaration, the country’s Supreme Electoral Tribunal (TSE) awarded him 52.93 per cent of the vote with almost 70 per cent of ballots counted.

The result upends the nearly 30-year grip that their parties – the country’s largest – have had on Salvadoran politics.

“We recognise the results of these elections. We are going to call the president-elect to wish him luck in facing the challenges in this country,” said Calleja, the runner-up with 32.08 per cent of the vote. Martinez took third place with 14.23 per cent.

Bukele has promised to increase investment in education and fight corruption but his main task will be to implement new programs to confront insecurity.

However he will have to form an alliance with the right, which dominates congress.

Bukele won El Salvador's presidential election outright by securing a majority of the votes in Sunday's first-round ballot. "Today we won the first round and we made history," Mr Bukele, said in a victory speech to cheering supporters. "We've turned the page on power."

He needed more than 50 per cent of votes to win the presidency outright, bringing an end to the two-party system that has governed the tiny country of 6.5 million people for three decades.

Mr Bukele, 37, has capitalised on the anti-establishment feeling sweeping elections across the region and further afield, as voters seek an alternative to traditional parties.

Since the end of its bloody civil war in 1992, El Salvador has been governed by the ruling leftist Farabundo Marti National Liberation Front (FMLN) and its rival, conservative Nationalist Republican Alliance (Arena).

Though he describes himself as from the left and was expelled from the FMLN, Mr Bukele has formed a coalition including a right-wing party that together has just 11 seats in the legislature.

"The two groups that created the war still want to keep governing, and what's more, they're corrupt," Mr Bukele told reporters after voting in the capital.

Outside of the hotel in San Salvador where Mr Bukele waited for the results, a group of supporters set off fireworks, beat drums and danced as early figures came in.

Pollster Mitofsky found in a January poll that Mr Bukele had 57 per cent of voter support, while a poll by Gallup showed him with 42 per cent. Both polls showed Arena's Carlos Calleja in second place.

A run-off, is there is one, would be held in March.

El Salvador's next president will face United States President Donald Trump's criticism of Central American governments for not doing enough to prevent migration to the US. He will also have to manage an American backlash against El Salvador's recent establishment of diplomatic relations with China. 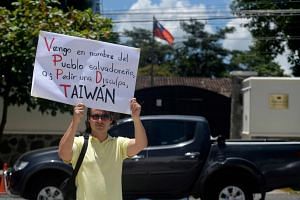 US reviewing El Salvador ties after break with Taiwan

At home, the new government will have to try to kick-start a sluggish economy, combat corruption and tackle one of the highest homicide rates in the world.

Some voters said they were sceptical that Mr Bukele has the experience to govern. Others said a third-party candidate is the only option for dramatic change.

"We had 20 years eating trash with Arena, and 10 years with the Front. We have to vote for something different, and something different is this kid Nayib," said driver Oscar Rosales, 46, a former FMLN supporter who voted at a school in the city of Santa Tecla, outside the capital.

Entire families turned up at polling stations to vote, from parents with their children to older people in wheelchairs, in a calm atmosphere presided over by police.

Mr Bukele, who was San Salvador mayor between 2015 to 2018, wants to create an international anti-corruption commission with the support of the United Nations, following similar committees in Guatemala and Honduras.

"We'll create a (commission) ... so that the corrupt can't hide where they always hide, instead they'll have to give back what they stole," Mr Bukele said in January.

Growing up, Mr Bukele's relatively wealthy family was sympathetic to the FMLN, the former leftist guerrilla army that became a political party at the end of the civil war.

"A dictator is a dictator, on the 'right' or the 'left'," Mr Bukele, who has a large social media following, wrote last week on Twitter.