During Guzman's 17 months behind bars, the government detained the top leaders of the country's main criminal organizations, fracturing most into smaller gangs.

While Guzman's February 2014 arrest was a major coup for the government, the Sinaloa cartel is believed to have remained the biggest criminal organization in Mexico.

At the same time, the Jalisco New Generation drug cartel, a former armed wing of the Sinaloa crime syndicate, emerged as one of Mexico's most violent and powerful criminal organizations.

"I have identified them (Jalisco and Sinaloa) as the cartels that are operating and functioning," Tomas Zeron, the director of investigations at the attorney general's office, told Proceso magazine last month.

"The others have been dismantled and begun to work as independent cells in municipalities."

The heads of the Zetas, Gulf, Knights Templar, Beltran Leyva and Juarez cartels have all been captured, many thrown in the same fortress as Guzman, the Altiplano maximum-security prison some 90km west of Mexico City.

While his rivals remain in prison, Guzman has been on the lam since late Saturday, when he spectacularly broke out of his cell through a 1.5km tunnel that was dug under his shower. 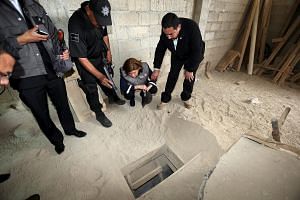 Mexico hunts for drug lord after escape as 1.5km-long tunnel found under prison

"The spectacular escape adds to the Chapo Guzman legend," said Mike Vigil, a retired chief of international operations at the US Drug Enforcement Administration (DEA).

"He's very much liked by the members of the cartel and they will accept him very quickly with open arms." Guzman's main partner within the Sinaloa cartel, Ismael "El Mayo" Zambada, is believed to have filled the void during his absence.

But unless security forces catch him within days, Guzman will likely vanish into the mountains of the northwestern state of Sinaloa and return to his throne.

Zambada will happily give up the crown because he has no interest in the job, which makes him a bigger target, Vigil said.

With Guzman back at the helm, Mexico will see more violence while the United States will be flooded with more drugs, the ex-DEA agent said.

"Chapo Guzman is a conqueror, and he wants to control all of Mexico in terms of the drug trade," Vigil said.

"The only way you can do that is by taking control of more and more territory, which is going to lead to more conflict."

The only gang standing in his way could be the New Generation, led by Nemesio "El Mencho" Oseguera, though it is unclear whether the gang based in western Jalisco state would turn against its old employer.

"The field appears to be wide open," security expert Patrick Corcoran wrote on InsightCrime.org, a website specialized in organized crime.

"Unlike the last few years prior to Guzman's arrest, the Sinaloa Cartel does not have any adversaries of comparable power," he wrote.

"Logic suggests that this is the perfect time for Guzman to rebuild his group's hegemony, and swoop into areas where it had previously lost influence." But some say that Guzman's grand return will not dramatically change the narco-trafficking landscape.

"The dynamic between organized crime groups doesn't depend on whether a leader has been arrested or not," said Dwight Dyer, a security expert at global consultancy Control Risks and former Mexican intelligence agency official.

It depends, he said, on "the capacity of federal and state governments to combat organized crime in a region."