Early Wednesday, the director of Mexico’s civil protection agency, Luis Felipe Puente, said on Twitter that 216 people had been killed, revising an earlier toll of 248.

Eighty-three people were killed in Mexico City, Puente said. At least 21 were children killed at an elementary school that collapsed in the Mexican capital.

“We have a report of 25 dead, among them 21 children and four adults” at the Enrique Rebsamen elementary school, Mexican Undersecretary of Education Javier Trevino told the Televisa network.

Mexican President Enrique Peña Nieto said late on Tuesday that another 30 children and 12 adults were missing.

Emergency personnel and equipment were being deployed across affected areas so that “throughout the night we can continue aiding the population and eventually find people beneath the rubble,” Peña Nieto said in a video posted on Facebook earlier on Tuesday evening.

At least 12 people were killed in the neighboring state of Mexico, and three deaths were reported in the state of Guerrero on the Pacific coast.

The earthquake struck on the 32nd anniversary of another major disaster: the 1985 quake that killed as many as 10,000 people in Mexico.

It also came less than two weeks after the most powerful earthquake in Mexico in a century, an 8.1 magnitude quake that killed at least 90 people, destroyed thousands of homes and was felt by tens of millions of people in Mexico and in Guatemala.

Residents in Mexico City, having just experienced shaking from that quake, said the tremors on Tuesday were far worse.

“People are really scared right now,” said dentist Claudia Meneses who was in her clinic in Mexico City’s Lindavista neighbourhood when the earthquake struck in the afternoon.

“We’re going to go to a building that fell to see if we can help.” Earthquakes of magnitude 7 or above are regarded as major and are capable of causing widespread heavy damage. The overall toll rose steadily in the hours after the quake.

Television images showed a multi-storey building in the capital Mexico City, one of the world’s biggest cities, with a middle floor collapsed as sirens blared and first responders rushed to the scene. Other video showed the side of a government building shearing off and falling into the street as bystanders screamed.

Among the collapsed buildings in the capital were apartment blocks, a school, a factory and a supermarket. The fashionable Roma district was hard hit, and a six-storey apartment building was among several collapses reported. 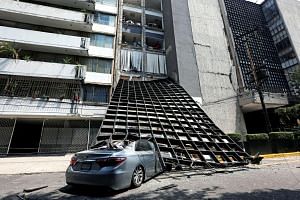 Hundreds of volunteers and rescue workers dug through the rubble with picks, shovels and their bare hands. 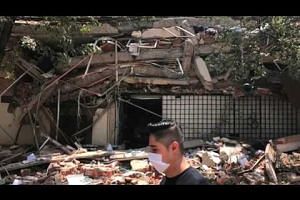 “My wife is there. I haven’t been able to communicate with her. She is not answering, and now they are telling us we have to turn off our cellphones because there is a gas leak,” said Juan Jesus Garcia, 33, choking back tears.

On Twitter, relatives posted pleas for news of family members, including eight-year-old Alexis Vargas Macias who was at school when the quake hit.

Rescue workers pulled at least one survivor from a collapsed building in the Condesa neighbourhood near the centre of Mexico City.

US President Donald Trump said on Twitter: “God bless the people of Mexico City. We are with you and will be there for you.”

Officials in several other countries responded to the quake with offers of help.

Justin Trudeau, the prime minister of Canada, tweeted: “Devastating news from Mexico City. My thoughts are with those affected by today’s earthquake – Canada will be ready to help our friends.”

Mexican Foreign Minister Luis Videgaray responded by saying “Mexico sincerely thanks the displays of international solidarity that we are receiving.”

The city and its surrounding area are home to about 20 million people. In Cuernavaca, a city south of Mexico City, there were unconfirmed reports on local radio of people trapped beneath collapsed buildings.

Mexican TV and social media showed cars crushed by debris. Many people fled into the streets, and electricity and phone lines were down in parts of the capital.

Building collapses in #MexicoCity after powerful earthquake; no word on casualties yet! pic.twitter.com/HklutmumRw

Aftershock from the earthquake in #mexicocity #cdmx pic.twitter.com/oKUZgOcG9F

Video just in of the 7.1 #earthquake 76 miles outside #MexicoCity. It comes on the 1985 anniversary of a major quake. Courtesy: @fabiantxt pic.twitter.com/MqC2zugQIQ

“We got out really fast, leaving everything as it was and just left,” said Rosaura Suarez, as she stood with a crowd on the street.

He added that he saw a woman who fainted. “People started to run.”

“I’m so worried. I can’t stop crying. It’s the same nightmare as in 1985,” one resident in a plaza in the capital, Georgina Sanchez, 52, sobbed to Agence France-Presse.

The quake hit only hours after many people participated in earthquake drills around the nation on the anniversary of a devastating quake that killed thousands in Mexico City in 1985.

Many people were also still shaken from another quake on Sept 7 in southern Mexico that killed at least 98 people.

The epicentre of Tuesday’s quake was located in the central state of Puebla, the US Geological Survey said.