MANZANILLO, Mexico (AFP) - Super-storm Patricia closed in on Mexico’s Pacific coast on Friday as the strongest hurricane on record, sending residents, tourists and authorities scrambling to prepare for a potentially devastating hit.

Authorities relocated some villagers, closed ports and schools in several states and evacuated tourists from beach hotels as the hurricane churned toward shore in the western state of Jalisco.

After Patricia’s top winds reached a record 325kmh, they slightly weakened to 305kmh as it neared the coast, the US National Hurricane Centre said.

President Enrique Pena Nieto said Patricia was due to hit at about 2100-2300 GMT (5am on Saturday Singapore time) in Perula, Jalisco, south of the tourist resort of Puerto Vallarta and close to the port of Manzanillo.

“We are facing a natural phenomenon, a force that we have never seen before” in the world, President Enrique Pena Nieto told Radio Formula.

“We will face difficult moments.”

“The country faces a threat of great scale,” Pena Nieto said, adding that the government’s priority is to “protect and save the lives of Mexicans.” 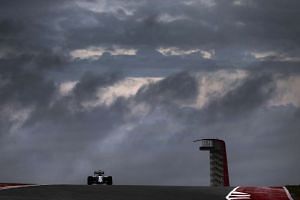 Formula One: Hurricane Patricia puts US Grand Prix at risk 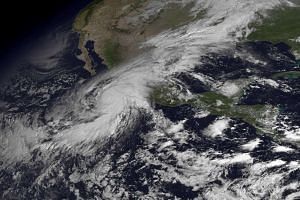 Rain and wind lashed the coast hours after Patricia mushroomed late Thursday into a category five storm – the top of the Saffir-Simpson scale.

Patricia was even more powerful than the 315 kmh winds of Super Typhoon Haiyan, which left more than 7,350 dead or missing when it struck the Philippines in November 2013.

Stores shut down in Puerto Vallarta, and shop owners attached duct tape to their windows for protection.

"I’ve had to give away tape to people who weren’t prepared,” said Ramiro Arias, owner of a frame shop.

“We’re procrastinators. We don’t react until we see the situation.”

Despite the incoming storm, a swimmer was spotted in the water.

A handful of people waited at a bus station for their last chances to get out of town while others bought water and loaded vehicles with jerrycans of fuel.

Rain pelted the coast after Patricia mushroomed late Thursday into a Category Five storm – the top of the Saffir-Simpson scale – with maximum sustained winds of 325kmh, according to the US National Hurricane Centre.

The centre said on its website that Patricia was “the strongest hurricane on record in the National Hurricane Centre’s area of responsibility which includes the Atlantic and the eastern North Pacific.”

“Some fluctuations in intensity are possible today but Patricia is expected to remain an extremely dangerous category five hurricane through landfall,” the center said.

“An extremely dangerous storm surge is expected to produce significant coastal flooding near and to the right of where the center makes landfall,” the Miami-based centre added.

Forecasts show Patricia will make landfall somewhere between the major port of Manzanillo in Colima state and Jalisco state’s tourist resort of Puerto Vallarta, which Mexican officials fear could face a direct hit.

Some businesses boarded up their store windows in Manzanillo.

“Better to be safe than sorry. Hurricanes are unpredictable,” said Enrique Esparza, manager of El Gran Mueble furniture store, which is near the seafront.

“We’re running home to put wood and tape on the windows,” she said late on Thursday.

Jose Maria Tapia Franco, director of the National Disaster Fund, said 400,000 people live in vulnerable areas and that local authorities will decide whether to conduct evacuations.

At the beach village of Boca de Pascuales, authorities took 70 people to a shelter while another 30 drove to the homes of relatives further inland.

In Colima, communities around the Volcano of Fire were evacuated over concerns that ash that accumulated during recent volcanic activity could combine with water to produce landslides.

At 1500 GMT (11pm Singapore time), Patricia was 200km south-west of Manzanillo and moving north at 17kmh, according to the US forecasters.

Patricia is expected to produce up to 51cm of rainfall over the states of Nayarit, Jalisco, Colima, Michoacan and Guerrero, which could produce life-threatening flash floods and mudslides, the US centre said.

The Mexican water commission warned that rivers could rise and roads could be affected by the bad weather.

Jalisco, Michoacan, Colima and Nayarit are expected to get the equivalent of 40 per cent of their annual rainfall in the next 48 hours, the National Water Commission said.

Mexico faces the double threat of Atlantic and Pacific tropical storms during the hurricane season, which ends Nov 30.