But Meng, who is out on bail awaiting possible extradition to the United States on fraud charges, did not appear.

She is holed up at her other Vancouver home, a six-bedroom house worth approximately C$6 million in Canadian dollars in the wealthy Dunbar neighbourhood, while this one is being renovated.

"Meng is a source of national pride in China, and I wanted to see a superrich Asian lifestyle," said the student, Parker Li. "Many Chinese people from mainland China feel she is being unfairly bullied by the United States."

Many Canadians, though, feel differently.

Three months after her arrest, Meng has become both a subject of curiosity and a polarising figure in Vancouver, which has had a significant concentration of Asians stretching back to its founding in the 19th century.

To some, she is yet another wealthy foreigner who has used the city as a real estate investment, helping it to become one of the most unaffordable cities in North America.

And they contrast her predicament - able to travel relatively freely about the city, if with a GPS tracker around her ankle and under 24-hour surveillance - with that of their fellow citizens, several of whom have been arrested by China in apparent retaliation for Meng's arrest.

Tensions between Canada and China have seldom been more tense.

On Monday (March 4), China accused Michael Kovrig, a former Canadian diplomat, of espionage, saying he spied and stole state secrets that the government said another detained Canadian, Michael Spavor, gave to him.

The accusation came just days after Canada authorised Meng's extradition hearing in Vancouver, which is expected to begin Wednesday at the Supreme Court of British Columbia. 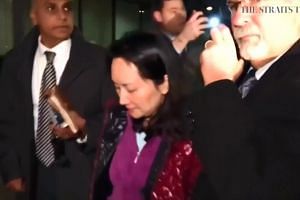 Since they were detained in December, Kovrig and Spavor have been held in secret detention sites, without visits from lawyers and family members. Another Canadian, Robert Lloyd Schellenberg, faces a death sentence in China for drug smuggling.

And the legal fight has now spread, with more court actions.

Over the weekend, lawyers for Meng announced they were suing members of the Canadian Border Services Agency, the Royal Canadian Mounted Police and the federal government for breaching her constitutional rights when she was detained for three hours in December before being arrested.

Further ratcheting up the acrimony, Huawei is preparing to sue the US government for banning federal agencies from using the company's products.

Here in Vancouver, the case against Meng has played into a citywide fixation with skyrocketing real estate prices and the effect of foreign investment.

"Meng has tapped into anger and resentment here at the incredible inequality in Vancouver; this idea that foreigners are buying freedom here and turning Vancouver into a hedger's city where you park your money but you don't stay," said Andy Yan, a professor at Simon Fraser University who studies the social consequences of Vancouver's real estate explosion.

"People are upset that she is under house arrest in a mansion while two Canadians sit in Chinese jails," he added.

Prof Yan noted that her residence in the house in the Dunbar neighbourhood, on the west side of the city, had particularly touched a nerve. The area was emblematic of many others in the city that had once been the domain of the aspirational middle class but had become flooded with foreign capital.

"Now only millionaires can afford to live there," he said.

At dinner parties and cafes across the city, many here have dismissed Meng as a "poor little rich girl" who, under the terms of her C$10 million bail, is allowed to leave her house until an 11pm curfew, including traveling to Richmond, a nearby city with a vibrant Chinese community, dim sum restaurants and sprawling shopping malls selling designer brands. 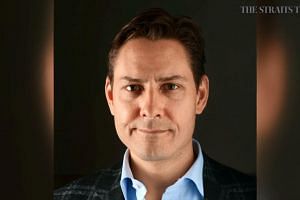 "If you have to be in prison, this doesn't seem like a bad one to be in," said Karen Weichel, a neighbour of Meng in Dunbar, pointing to the executive's spacious home, guarded by several teams of security guards in suits sitting in gleaming Cadillac SUVs.

They are charged with, among other things, ensuring she does not try to escape.

The other day, a security guard outside her Dunbar house, said that in recent weeks, she had kept a low profile and stayed at home.

A purple sedan with the word "Bubba" on its license plate was parked in the back of the house, blocking the driveway.

A Chinese neighbour from Beijing who was out walking her dog said that after Meng's release on bail, she had run into her on the street as she was getting into her chauffeur-driven car.

"We find it hard to accept what Canada is doing," she said. "It doesn't seem to be able to distinguish between good and evil, and we hope that Meng will come out of this safely." Meng herself pays for a team of guards from Lions Gate Risk Management Group, a private security firm, who monitor her, keep a log book and note every person entering and leaving the house.

In a picturesque and outdoorsy city, where local residents talk obsessively about property and some are seen walking down the street holding yoga mats, those who offered collateral to facilitate bail included a part-time yoga instructor and the real estate agent who sold Meng and her husband their two imposing homes.

Meng is the eldest daughter of Ren Zhengfei, Huawei's founder, and rose from being a secretary to the public face of the company. During her bail hearing in December, her lawyer, David Martin, said she was looking forward to spending some quality time with her family during her detention.

She hadn't "read a novel in years," he told the court, adding that she was considering pursuing a doctorate in business administration at the University of British Columbia, where Huawei is financing millions of dollars of research and development, including into 5G wireless networks.

Mr Li, the University of British Columbia student who studies China's political economy, said Meng's case had divided students on campus, with some from mainland China tending to sympathise with her plight and others viewing her arrest as Canada merely trying to apply the rule of law.

Wenran Jiang, a senior fellow at the Institute of Asian Research at the University of British Columbia, noted that for some Chinese immigrants in the city, Meng's arrest had tapped into deep-seated historical memories of Canada's discrimination against Chinese people.

Between 1885 and 1923 the Canadian government imposed a "head tax" on Chinese immigrants intended to curtail them from coming to the country, and Chinese immigration, with rare exception, was banned altogether in 1923 for more than two decades.

"Vancouver is a very Asian city, so there is a deep fascination with Meng because she is such a high-profile Chinese person," he said. "For some, she has become a powerful symbol of Chinese people once again being subjugated."