VANCOUVER, CANADA (REUTERS) - Tackling female genital mutilation (FGM) should be made a global priority like HIV/Aids, according to campaigners concerned about growing evidence that the abusive practice was more widespread than thought.

The ancient ritual, involving the partial or total removal of the external genitalia, can cause severe health problems. No one knows how many girls bleed to death or die later in life from related childbirth complications.

Some 200 million girls and women are impacted by FGM worldwide, according to UN data, but some activists said this was a "massive underestimate" as it ignored the true geographic spread of FGM and omitted children and older women.

The UN estimate is based on data from 30 countries, almost all in Africa, while campaigners at the Women Deliver conference in Canada said there were studies or anecdotal evidence showing FGM happened in more than 30 other countries.

"We're learning every day that there are more pockets where this is happening," said Ms Shelby Quast, Americas director at women's rights group Equality Now. 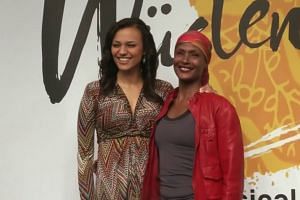 London mum gets 11 years for mutilating daughter in landmark trial

Indian minister calls for minority Muslim community to end female genital mutilation, or have it banned under law

Earlier this year, a woman from a strict white American Christian community in the state of Kentucky told the Thomson Reuters Foundation how she had undergone FGM as a child.

The story provoked a backlash from some Christians, but Ms Quast said similar cases had come to light.

Some campaigners were also surprised by a medical study released at the weekend showing FGM was practised in Saudi Arabia - not a country traditionally linked with the ritual.

"We know it happens on every continent, but what we don't have is good data," Ms Quast said. "If you can't count it, it's very hard to get funding to end it."

HIV by comparison - which affects about 37 million people - attracted US$20 billion in funding in 2017.

"We don't want to undermine the importance of the HIV movement, we want to learn from the HIV movement," Orchid founder Julia Lalla-Maharajh told the Thomson Reuters Foundation at Women Deliver, the world's largest gender equality conference.

Ms Lalla-Maharajh said HIV - like FGM - was once a neglected and taboo issue, with grassroots activists and survivors instrumental in galvanising global action.

Campaigners called for data collection to be ramped up in order to fully assess the global scale of FGM and better target efforts to end it.

Ms Quast said there was a particular gap in information from South America.

World leaders have pledged to end FGM by 2030 under global development goals agreed in 2015. Campaigners said better data would help hold governments accountable on their promises.