CARACAS/MARACAIBO (REUTERS) - Some Venezuelans worried on Thursday (July 26) about how to pay for public transport and gasoline after leftist President Nicolas Maduro announced plans to slash five zeroes off the country's bolivar currency, rather than the three originally planned.

The more aggressive so-called currency redomination comes in response to Venezuela's hyperinflation, which the International Monetary Fund has said will soar to 1 million percent this year, destroying salaries and throwing the OPEC nation's already battered economy into a deeper tailspin.

Maduro's announcement late Wednesday (July 25) night spawned confusion as to whether there would be legal tender small enough to pay for public transit or gasoline - which is so subsidized that filling up a car at a gas station costs less than the equivalent of US$0.01 at the black market exchange rate.

"How will I pay for transport? They charge me 60,000 bolivars. With five zeroes fewer, that would be in cents," said Griselda Osorio, 55, as she shopped at a market in the western city of Maracaibo near Colombia.

"I am going to have to forget about transport and just walk. How will I put (prepaid credit) on my phone? Where do I find cents for that? This will just make things worse," said Osorio, a nurse whose current salary of 4 million bolivars - about US$1.30 - will turn into 40 bolivars.

It also remains unclear whether banks can adjust their systems and cash machines by the announced deadline of Aug 20, as well as when all the new bills will arrive in Venezuela.

Maduro's plan to lop five zeroes off the currency highlights the reversal of fortune in a once wealthy country, which has seen the bolivar lose over 99 per cent of its value in the last year alone amid an economic meltdown. 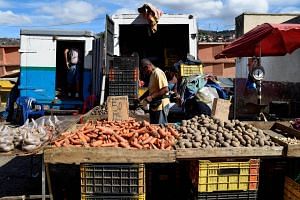 Venezuela to remove five zeroes from currency as hyperinflation heads for 1,000,000%

The measure, according to economists, fails to attack the root of Venezuela's crisis - namely two decades of distorted state-led economic policy and excess expansion of the money supply.

"Eliminating the zeroes, although necessary, is insufficient because hyperinflation's underlying problem, which is a deep imbalance of the economy, is not attacked," said economist Asdrubal Oliveros of local consultancy Ecoanalitica.

The government has said it is the victim of an "economic war" led by opposition leaders with backing from Washington, which last year levied several rounds of sanctions against Maduro's administration and a group of top officials.

Many Venezuelans say that is a smokescreen designed to hide incompetence and bad policy decisions.

"We are more screwed by the day," said motorbike deliveryman Luis Ramirez, 60, as he delivered a package in Caracas. "This measure, which I do not understand very well, does not change anything."