RIO DE JANEIRO (AFP) - Since taking power on a pledge to trash corrupt "old politics", Brazilian President Jair Bolsonaro's first months have been marred by chaos and blunders that have eroded support for the far-right leader and put the brakes on his reforms.

The brash ex-army captain - nicknamed the "Trump of the tropics" for his admiration of the US president - is struggling to make good on his key election promises to kick-start Latin America's biggest economy and stamp out corruption.

As President Bolsonaro prepares to mark the symbolic milestone of 100 days in office on Wednesday (April 10), analysts say the euphoria of his October victory that ended decades of centre-left rule is evaporating.

"It wouldn't be an understatement to say that the president's performance to date has been disappointing," said Mr Thomaz Favaro of the political risk consultancy Control Risks.

"There was a misperception that he was coming in with a very strong support base and I think we're now beginning to see that maybe that support wasn't strong."

Condemned by opponents as racist, sexist and homophobic before the ballot, Mr Bolsonaro's message of toughness and an end to business-as-usual politics resonated with voters fed up with violence and industrial-scale graft.

But Mr Bolsonaro, who was better known for making insults rather than policy during his decades as a congressman, is finding that his uncompromising style and penchant for Twitter are not working in Congress where he lacks a ruling-party majority to push through legislation.

His signature policy to overhaul Brazil's unsustainable pension system, which he has warned would bankrupt the country if changes are not adopted, has stalled following a spat with key political allies and raised doubts about his ability to do the job.

"His lack of governing experience, showing up in deteriorating relations with Congress, and his struggles to keep his coalition together seem to have led to a paralysis in policymaking."

Mr Bolsonaro appears to have adopted a more conciliatory tone in recent days, holding meetings with the leaders of several parties.

He may have finally accepted the "give and take" of Brazilian politics, said political science professor David Fleischer at the University of Brasilia. 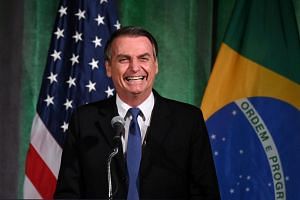 "It's a make or break," Prof Fleischer warned. If the pension reform bill fails then Bolsonaro "doesn't get any tax reform, which is another important thing on the table, and his government will just drift along until 2022".

Mr Bolsonaro has scored some wins since his Jan 1 inauguration, including the relaxation of gun ownership laws and the sale of concessions to 12 airports, which was seen as test of foreign-investor confidence in his ability to privatise state-owned companies.

But more contentious policies are going to be tough to push through the lower house of Congress where Mr Bolsonaro's ultra-conservative Social Liberal Party only holds around 10 per cent of the 513 seats.

That means he is relying on ad-hoc alliances with lawmakers in various parties who are part of his evangelical, pro-agribusiness, pro-gun base.

Further complicating Mr Bolsonaro's task is the chaos within his own government, where competing factions, including the military, right-wing ideologues and his own sons - are jostling for influence over policy.

"It's a tightrope he will be constantly trying to tread," said Mr Favaro."Bolsonaro's strategy depends on his political capital to create a viable coalition in Congress and that's tricky because we're now seeing the president's approval rating decline."

Mr Bolsonaro's approval rating plunged to 51 per cent in March from 67 per cent in January - the worst reading recorded by a first-term president in the three months after taking power.

A series of missteps and blunders have further undermined Mr Bolsonaro's credibility and exposed his government's inexperience.

Mr Bolsonaro's recent idea to commemorate the 1964 military coup triggered widespread anger and street protests, while his claim during a visit to the Holocaust museum in Israel this month that Nazis were "leftist" was derided.

A pledge to move Brazil's Israel embassy to Jerusalem, on hold for now, also risks provoking commercial retaliation from Arab states, some of which are major importers of Brazilian meat.

And a slew of scandals, including allegations of illegal financial transactions involving one of Mr Bolsonaro's sons, have damaged his anti-corruption image.

"He's done a lot of dumb things," Prof Fleischer said. "He doesn't have strong enough advisers at his side to say, 'Well, you'd better not do that'."

After high hopes that Mr Bolsonaro's market-friendly platform would reinvigorate an economy still struggling to recover from the record 2015-2016 recession, investors are losing faith.

"Bolsonaro's team talked a good game about reforms," said Mr Jackson. "But even a president with a great track record in building coalitions would struggle to push all this through."