ALTAMIRA, Brazil (AFP) - Forty-six inmates involved in one of Brazil's deadliest prison riots were being transferred to other jails on Tuesday (July 30), an official said.

At least 57 people were killed on Monday when fighting broke out between rival drug gang factions in the Altamira Regional Recovery Centre in the northern state of Para.

Sixteen were decapitated in the hours-long battle, but most died in a fire that engulfed part of the overcrowded facility that used converted shipping containers to house some of the inmates.

It was the second major eruption of violence to rock the country's severely overpopulated and deadly prison system in as many months.

Inmates involved in the fighting, including 16 leaders suspected of ordering the riot, were being transported on Tuesday by bus or plane to detention facilities, including federal prisons, in the capital Belem, an official from the state government's penitentiary department told AFP.

Most of the bodies have been recovered from the jail and clean up operations were under way, she said.

The government is providing financial assistance to the families of the dead to help pay for funerals, she added.

Experts estimate hundreds of prisoners are killed in Brazilian prisons every year, mostly in confrontations between rival gangs battling for control of one of the world's most important cocaine markets and trafficking routes.

Monday's riot was one of the deadliest in Brazil in decades. The turf war involved members of Class A Command and Red Command, one of the country's main crime groups, officials said. 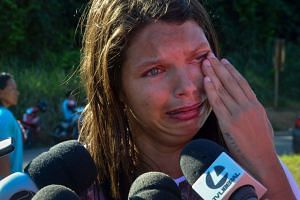 In May, at least 55 inmates were killed at several jails in the neighboring state of Amazonas, in violence also blamed on an apparent drug trafficking gang dispute.

In 1992, 111 prisoners were killed when security forces put down a mutiny at the enormous Carandiru jail outside Sao Paulo.

Brazil has the world's third-largest prison population after the United States and China, with 726,354 inmates as of June 2017, according to the latest official statistics released this month.

The population is way above the capacity of the nation's jails, which in the same year was estimated to be 423,242 inmates.

Around 33 percent of the prison population is made up of pretrial detainees.

Conditions inside the prisons have been described as inhuman, with most inmates poor, black and with little formal education.

The Altamira Regional Recovery Centre was no exception.

The National Justice Council, a government agency monitoring prisons, rated conditions inside the jail as "very bad" and said the facility was holding more than twice as many prisoners as it was equipped to handle.

It also had a shortage of guards.

"This problem from hell will not be solved by throwing more prisons at the problem," said Robert Muggah, research director at the Igarape Institute, a think-tank in Rio de Janeiro.