HAVANA (REUTERS) – Hurricane Irma lashed Cuba and the Bahamas as it drove toward Florida on Friday (Sept 8) after hitting the eastern Caribbean with its devastatingly high winds, killing 21 people and leaving catastrophic destruction in its wake.

As Irma, one of the most powerful Atlantic storms in a century, was expected to hit Florida on Sunday, Governor Rick Scott starkly warned residents to get out if they were in evacuation zones.

“We are running out of time. If you are in an evacuation zone, you need to go now. This is a catastrophic storm like our state has never seen,” Scott told reporters, adding that the storm’s effects would be felt from coast to coast in the state. 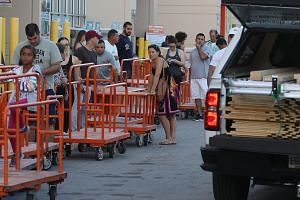 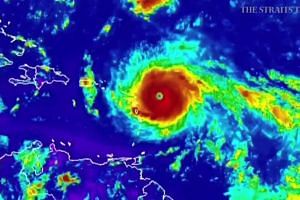 Irma barrels towards Caribbean, southern US

US President Donald Trump said in a videotaped statement that Irma was “a storm of absolutely historic destructive potential,” and called on people to heed recommendations from government officials and law enforcement.

Irma was about 360km east of Caibarien on Cuba’s central-north coast, and 610km south-east of Miami, the National Hurricane Centre (NHC) said in an advisory at 2pm EDT on Friday (2am on Saturday, Singapore time).

Hurricane conditions were spreading westward over parts of Cuba and the central Bahamas as the storm skirted near Cuba’s northern coast.

The storm earlier pummeled the Turks and Caicos Islands after saturating the northern edges of the Dominican Republic and Haiti.

The storm was downgraded from a rare Category 5, the top of the scale of hurricane intensity, to a Category 4 early Friday but it was still carrying winds as strong as 250kmh, the NHC said.

Irma was forecast to bring dangerous storm surges of up to 6m to the southeastern and central Bahamas, and up to 3m on parts of Cuba’s northern coast.

Cuban television broadcast footage of the sea flooding coastal towns in the eastern provinces of Guantanamo and Holguin, with waves reaching 6m. With the storm still well offshore, flooding from the storm surge and inland from rain and swollen streams and rivers were the main concerns.

Cuba’s Communist government has traditionally made rigorous preparations when the island is threatened by storms and the country was at a near standstill as Irma began to drive up the northern coast from east to west.

Irma was forecast to move closer to land as it passed the centre of Cuba later in the day and on Saturday, when it could seriously damage resorts on vulnerable keys. Tourists, and even the dolphins that entertain them, were evacuated. The storm was then predicted to veer north, sparing western Cuba and Havana.

In the Cuban fishing town of Caibarien, residents secured their roofs and moved belongings from low-lying coastal areas to houses higher up inland as the skies clouded over. Most said they were worried but well prepared.

Esteban Reyes, 65, was pushing his bicycle taxi laden with a mattress, iron and DVD player.

“We are used to storms but I’m still a bit scared. But the government has taught us to be prepared and help one another,” he said.

In the Bahamas, the government evacuated most people from the southern islands before the storm hit, with some 1,200 people airlifted to the capital, Nassau.

Irma was set to hit the United States two weeks after Hurricane Harvey struck Texas, killing about 60 people and causing property damage estimated at as much as $180 billion in Texas and Louisiana. Officials were preparing a massive response, the head of the Federal Emergency Management Agency said.

Amid the exodus, nearly one-third of all gas stations in Florida’s metropolitan areas were out of gasoline, according to Gasbuddy.com, a retail fuel price tracking service.

In Miami-Dade County alone, Mayor Carlos Gimenez said authorities had asked about 660,000 residents to evacuate, adding this was the largest evacuation he could remember in the county.

US Senator Bill Nelson of Florida said the state was far more prepared now than in 1992, when Hurricane Andrew devastated Florida.

Supermarkets in Miami were full of shoppers picking up last-minute supplies and food, and long lines of cars wrapped around the few gas stations still open.

Kenneth Weipert, a stranded tourist from Scotland who was getting cash from an ATM at a boarded-up bank, said he had made multiple attempts to book a flight, with no luck.

“We have never been through anything like this before and we are quite worried about it,” said Weipert. “We are in the hotel and the hotel is hurricane-proof, allegedly,” he added.

In Palm Beach, the waterfront Mar-a-Lago estate owned by Trump was ordered evacuated, news media reported. Trump also owns property on the French side of St. Martin, a French-Dutch island devastated by the storm.

A mandatory evacuation on Georgia’s Atlantic coast was due to begin on Saturday, said Governor Nathan Deal, who expanded a state of emergency to include 94 of 159 counties as the storm’s predicted track shifted west. Virginia Governor Terry McAuliffe on Friday added his state to those under a state of emergency.

Governors in North and South Carolina warned residents to remain on guard even as the storm took a more westward track, saying their states still could experience severe weather, including heavy rain and flash flooding, early next week.

On Wall Street, the S&P 500 ended slightly lower as investors braced for potential damage from Irma as it moved toward Florida. Many economists are predicting that third-quarter gross domestic product will take a hit due to the hurricanes.

As it roared in from the east, Irma ravaged small islands in the northeastern Caribbean, including Barbuda, St Martin and the British and US Virgin Islands, flattening homes and hospitals and ripping down trees.

Even as they came to grips with the massive destruction, residents of the islands hit hardest by Irma faced the threat of another major storm, Hurricane Jose.

Jose, expected to reach the northeastern Caribbean on Saturday, was an extremely dangerous Category 4 storm, with winds of up to 240kmh, the NHC said on Friday.

The death toll from Irma has risen to 21 as emergency services gained access to remote areas.

The storm passed just to the north of the island of Hispaniola, shared by the Dominican Republic and Haiti, damaging roofs and causing flooding and power outages as it approached the Haitian side. One man was reported missing after trying to cross a river in Haiti’s Central Plateau region, and the government said some 10,000 people were in emergency shelters.