NEW YORK (Reuters) - The president of Honduras said on Monday(Sept 24) cuts in US support for Central America would hinder efforts to stem illegal immigration as he welcomed China's growing diplomatic presence in the region as an "opportunity".

In an interview, President Juan Orlando Hernandez expressed regret that prior US commitments to step up investment in Honduras, Guatemala and El Salvador had been scaled back since his US counterpart Donald Trump took office.

The US president has pledged to build a wall along the Mexico-US border to curb illegal immigration. The bulk of migrants stopped trying to cross the border are now from those three violent and impoverished Central American nations.

Since Trump became president, Hernandez said the United States had shown great willingness to work on combating street gangs known as maras that have menaced Central America. But it was less ready to support the region financially, he noted.

Under a scheme to strengthen Central America launched in 2014 known as the Plan of the Alliance for Prosperity in the Northern Triangle, the United States pledged to put forward a dollar for every four invested by Honduras, Hernandez said.

But that commitment has not materialised, he added.

"That will obviously have repercussions," he told Reuters.

"Because the whole idea of the Alliance for Prosperity ... was to attack the migration problem at the root."

Between 2016 and 2018, combined US foreign aid for Honduras, Guatemala and El Salvador declined by more than one third to US$195 million (S$266 million) , according to official U.S. data. 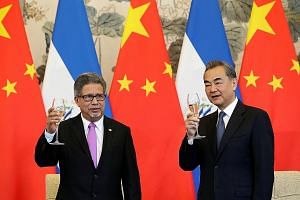 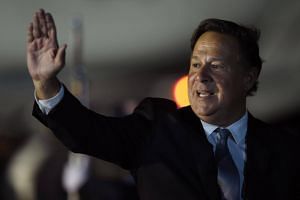 Adding to the challenges facing the region, the Trump administration announced earlier this year it would end temporary immigration protection for tens of thousands of Hondurans and Salvadorans living in the United States.

Last month, El Salvador broke off diplomatic relations with Taiwan in favour of China, citing economic reasons and following on the heels of Panama in 2017.

Honduras is one of a dwindling number of countries that still has formal diplomatic ties with Taiwan.

Hernandez said China's growing diplomatic presence posed a"quandary" for the region, but also "an opportunity for all," provided there are "clear rules." Other countries would likely follow the lead of El Salvador and Panama soon, he added.

"We see that things are changing in Central America. I think the United States has been a bit late to see it," he said.

When asked whether Honduras would switch to China, the president gave a careful answer on what the future held.

"We're still with Taiwan. Each country follows the principle of self-determination, that it can make its own decisions," he said.

"For the time being, we're betting on a commercial relationship with Taiwan, a window to enter the Asian market."

A crucial test of whether Washington was prepared to reaffirm its commitment to the region would be a meeting planned for mid-October with officials from the United States, the Central American nations and Mexico, Hernandez said.