In an interview before he left Lima, Peru, Mr Duterte said he was too tired and did not want to be seen dozing off beside his fellow leaders.

"I was light-headed because exactly at the time… was my sleeping time back home in the Philippines," he told reporters.

"I really can't help my eyes sometimes. Even as I was listening to others, my eyes would shut. I said I'd rather go home instead."

"I wanted (Yasay) to further his acting career," he joked.

He was not feeling well, according to Communications Minister Martin Andanar. 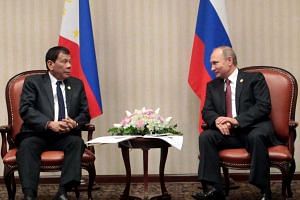 Duterte rails at West's 'hypocrisy' at meeting with his hero Putin

Both occasions would have had him near US President Barack Obama, whom he has called a "son of a whore" for criticising his controversial anti-crime drive.

Mr Duterte did hold bilateral talks with Chinese President Xi Jinping, and was effusive about his meeting with Russian President Vladimir Putin.

"You know, we have become fast friends. It seemed like we had known each other for so long, and you can see that in way we patted each other's hand," he said.

He said Mr Putin invited him four times to visit Russia, but not soon as it is still winter there.

Russia's leader also promised to give Mr Duterte a gun when he comes to Moscow.