HAVANA (AFP) - All Cubans can now have Wi-Fi in their homes, as the island's government extends Internet access even while trying to maintain control over its version of the "truth" and to defend its legitimacy, a top official tells AFP.

"Cubans support and defend the revolution in every domain, both in the real and the virtual worlds," Mr Ernesto Rodriguez Hernandez, Vice-Minister of Communications, said in an interview.

In his eyes, the Internet and social media are tools to "position the truth of Cuba, not to manipulate things", giving them a key role in the political and ideological battles being fought at a time of sharp diplomatic tensions with the United States.

The telecommunications sector in Cuba - once one of the world's least connected countries - has doubtless changed more than any other in the past year.

Since December, when mobile phones gained 3G connectivity, an active online community has sprung up on social networks, often questioning the government about the challenges of daily life on the island.

Since July 22, Cubans have been able to import routers, register their equipment and create private Wi-Fi networks connected to signals from state-controlled operator Etecsa. No longer do Cubans have to go to centralised public sites to connect.

"The objective of the country is to provide wider and wider Internet access to the entire populace," the vice-minister said.

But the technical requirements set out by new legislation would appear to put an end to the informal networks created in recent years by groups of residents. Such control is the "sovereign right" of the Cuban state, Mr Hernandez says. 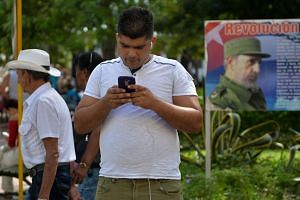 For weeks, hundreds of Cubans have been campaigning on social media under the hashtag #Bajenlospreciosdeinternet (#Lower the price of the Internet).

Since Wi-Fi's arrival in 2013, "the cost of Internet access has dropped by a factor of four", the vice-minister says, adding that "it will continue to fall" as communications infrastructure improves.

In this country of 11.2 million, 1,400 Wi-Fi hotspots have been installed, 80,000 homes now have Internet access and 2.5 million Cubans have 3G connectivity.

But the communist government is moving forward cautiously.

"The technology is not apolitical, as some try to present it," Mr Hernandez said, but instead is "manipulated and used".

Arguing for the need to "educate" the population, he added: "It does no good to provide Internet service to those who do not know... how to distinguish between what is useful and what is harmful; not everything on the Internet is good."

A series of decrees and measures published in early July in the island's official Journal call for "responsible use by citizens" as well as both "the political defence and cybersecurity in the face of threats, attacks and risks of all sorts".

The message is clear: the Internet must be an "instrument for the defence of the revolution", under regulations to be enforced by the Communications Ministry with the help of the "revolutionary armed forces and the Interior Ministry".

In short, the Internet will continue to be closely monitored by the authorities, as it has been from the start.

Only a small percentage of the Cuban population can access the global Internet, as opposed to the government-controlled national Internet, according to the non-governmental organisation Freedom House. Blogs and websites critical of the government are frequently blocked.

"We don't share those Internet sites that can encourage discrimination or deal with subjects that go against morality, ethics and responsible behaviour," he said. "It is a right of every state to protect its people and their society from practices of that sort - and I believe that every country in the world does so."