BOGOTA (AFP) - Colombia President Ivan Duque signed an order on Monday (Aug 5) allowing 24,000 children born in the country to Venezuelan parents and risking statelessness to be given Colombian nationality.

The children were the victims of a legal loophole that prevented them from obtaining their parents' nationality due to "insurmountable obstacles" but left them without Colombian nationality due to legislation that doesn't recognise citizenship based on place of birth.

"Today Colombia has shown the world that despite economic limitations, that even though we have revenues of less than $8,000 (S$11,060) per capita, much less than European countries that have experienced migration crises, we know how to turn brotherhood into a feeling of solidarity," said Duque.

He claimed the children were unable to get Venezuelan nationality because Venezuela President Nicolas Maduro's government had ceased to provide a consular service or documentation in Colombia.

Caracas broke off diplomatic relations with Bogota in February over Duque's support for opposition leader Juan Guaido, who declared himself acting president in January in a direct challenge to Maduro's authority, sparking a power struggle that has ground to an impasse.

The measure, which will be valid for two years, allows children born to Venezuelan parents from Aug 19, 2015, to be given Colombian nationality.

Venezuela is mired ion one of the worst economic crises in its history with a quarter of its 30 million population in need of aid, according to the United Nations. 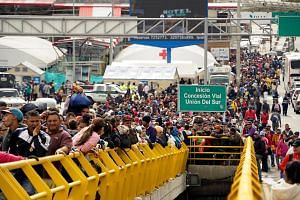 Venezuelans rush to Peru border ahead of migration crackdown

More than 3.2 million Venezuelans have left the country since the start of 2016, the UN says, with Colombia taking in the largest number of migrants, 1.3 million.

Colombia's Foreign Minster Carlos Holmes Trujillo said Colombia had received US$950,000 from the UN Children's Fund, the UN High Commissioner for Refugees and the International Organization of Migration.

"The international community is lacking a lot in terms of attention and help when you compare the figures with similar situations in other parts of the world," said Duque.