Mr Xi arrived in the Central American country late on Sunday, fresh from striking a 90-day truce deal in the trade war with US President Donald Trump at the G-20 summit in Argentina.

Since Panama's move, two other Central American countries - the Dominican Republic and El Salvador - have made the switch.

"Our bilateral relations have had a strong start after only a year-and-a-half," Mr Xi said.

Mr Varela said Mr Xi's visit - and the investment it brought - meant Panama would become "the gateway of China to Latin America". 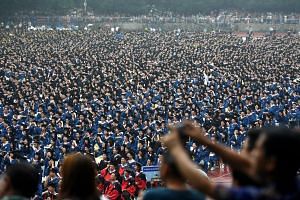 The two countries are also negotiating a free trade agreement.

In a column written for local newspaper Estrella de Panama, Mr Xi said he had "high expectations" for the visit, the first ever by a Chinese leader to the country.

"We must be cooperative partners of mutual benefit and shared profits," wrote Mr Xi.

Beijing hopes Panama can be a logistics hub for the expansion of trade in Latin America and the Caribbean - an idea the local business community has fully embraced.

"Panama usually generates a lot of interest because of its strategic location in the region and because of the canal," Mr Severo Sousa, president of the National Business Council (Conep), told AFP.

"What the Chinese want is very clear, they want to take advantage of the geographical position for their expansion and development in the region," said economist Francisco Bustamante.

"A strong Chinese presence in Panama reaffirms to the world China's rise in the global hierarchy at the expense of the United States," said Dr Carlos Guevara Mann, professor of international relations at Florida State University in Panama.

"Being caught in the rivalry between China and the United States would be extremely problematic for Panama," because "it could lead to reprisals by Washington", warned Dr Mann.

During a visit to the Central American country last month, US Secretary of State Mike Pompeo warned Mr Varela about China's growing influence in the region.

TUG OF WAR OVER TAIWAN

China and Taiwan have been governed separately since the end of a civil war on the mainland in 1949, but Beijing sees the island as part of its territory awaiting reunification.

Beijing and Taipei have been engaged for years in a diplomatic tug-of-war in developing countries, with aid and economic support often used as bargaining chips to gain diplomatic recognition.

Washington, which has accused the Chinese of trying to use aid to drive a wedge between Taipei and its Western Hemisphere partners, recalled its envoy to Panama City in September this year.

Mr Varela, who visited China last year, promptly asked the US to respect his country's sovereignty.