Defence Minister Alberto Espina also said at a news conference that they have found human remains from some of the 38 passengers who were aboard when the plane took off from southernmost Chile.

Officials said they believe that all those aboard the plane are dead, adding that it was nearly impossible to expect any survivors to be found.

The C-130 Hercules departed Monday afternoon from a base in far-southern Chile on a regular maintenance flight for an Antarctic base.

After midnight, the Air Force declared the plane a loss, but it wasn't until Wednesday that a plane scanning the seas first spotted floating debris believed to be from the plane.

"Remains of human beings that are most likely the passengers have been found among several pieces of the plane," said Air Force General Arturo Merino.

"I feel immense pain for this loss of lives."

Just three of the passengers were civilians, including Ignacio Parada, 24, who was in his last year of studies at the University of Magallanes and was headed to study drinking water systems at the military base. 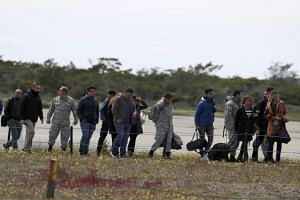 Chile combs Antarctic for missing plane with 38 aboard

Claudia Manzo, 37, was the only woman on board. She served in the Air Force service that deals with aerial photographs of the continent. She also served as one of Parada's research advisers.

Another of those aboard, electrician Jacob Pizarro, 38, had lost his wife five months ago, leaving behind two children, ages two and six, who are in the care of their grandmother.

The search included 23 aeroplanes and dozens of ships from Argentina, Brazil, United States, Great Britain and Uruguay as well as Chile.

General Cristian Pizarro said that the first of the recovered human remains will arrive ashore on Friday, when the identification process will begin.

The plane was flying over the Drake Passage, the sea between the southern tip of South America and Antarctica, which is infamous for rapidly changing and often severe weather.