FORT MCMURRAY, Canada (AFP) - Canadian police led convoys of cars through the burning ghost town of Fort McMurray on Friday in a risky operation to get thousands of people to safety on the other side.

In the latest harrowing chapter of the drama triggered by monster forest fires in Alberta's oil sands region, the convoys of 50 cars at a time made their way through the city at about 50-60kmh, TV footage showed.

Police took up positions at intersections along the way to keep evacuees from detouring to try to salvage belongings from charred homes and make sure the route remains safe from the fire, which has encircled the town of 100,000, now evacuated.

Three army helicopters hovered above to sound the alert if the flames got too close to the road, Highway 63, or cut it off completely, as has happened in recent days. 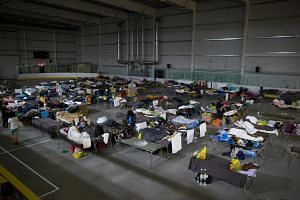 Those being evacuated - for a second time, after first abandoning their homes - had fled this week to an area north of the city where oil companies have lodging camps for workers.

But officials concluded they were no longer safe there because of shifting winds that raised the risk of them becoming trapped, and needed to move south to other evacuee staging grounds and eventually to Edmonton, 400km to the south.

Some 8,000 people were airlifted out of the northern enclave on Thursday on helicopters and planes. Officials expect the road convoys for the remaining 17,000 will take around four days.

Among the first evacuees to reach Wandering River, a hamlet about 200km south of Fort McMurray, Margarita Carnicero said she had feared for her life on the journey to safety.

"It was a terrible experience," she told AFP sitting in her dust-covered SUV alongside her teenage daughter Michelle. "I was afraid, but I tried not to show it (so as) not to frighten my daughter."

"With all of the smoke, the trip was hard on the lungs," said Greg Stengel, an oil company employee who also joined the convoy.

Before they got under way, officials had to make sure the escape route was passable, and truck fuel in so people had gas to make it across a city in flames.

Bright embers whizzed wildly through the air and floated down onto cars, like hot, orange rain.

Real rain is not expected for a couple of days.

"We understand that this is still an active situation. The wildfires are still raging," Prime Minister Justin Trudeau told a press conference Friday.

Evacuees are finding shelter with friends, family and even strangers close to Fort McMurray but also as far away as Edmonton and Calgary, Trudeau said.

The government has declared a state of emergency in Alberta, a province the size of France that is home to one of the world's most prodigious oil industries.

Alberta has been left bone-dry after a period of unusually scant rainfall and unseasonably high temperatures.

More than 1,100 firefighters are battling 49 separate blazes across the province - seven of them totally out of control.

The fires have engulfed 100,000ha of forest including at least 12,000 in the area surrounding Fort McMurray, now the epicenter of the inferno, where 2,000 homes have been destroyed.

Oil companies crucial to the region such as Suncor, Syncrude and Shell have pulled out non-essential employees, and analysts said all three have slashed output by a total of a million barrels a day.

The cuts amount to around a quarter of the country's entire production, and one-third of Alberta's, and mean a loss of tens of millions of dollars per day in income.

"I must be very, very direct about this," she said. "It is apparent that the damage to the community in Fort McMurray is extensive, and the city is not safe for residents at this time."