OTTAWA (AFP) - Canadian Prime Minister Justin Trudeau said on Wednesday (June 6) he expects “frank and sometimes difficult” conversations with US President Donald Trump on US tariffs at the upcoming Group of 7 (G-7) summit.

The Canadian prime minister will host the leaders of Britain, France, Germany, Italy, Japan and the United States for an annual G-7 summit in La Malbaie, Quebec on Friday and Saturday.

“We know certainly that there will be frank and sometimes difficult discussions around the G-7 table, particularly with the US president on tariffs,” Trudeau told reporters.

He had hoped to put the focus on jobs, security concerns, cleaning up the world’s oceans and empowering women. But officials have conceded the G-7 agenda is likely to be overtaken by trade disputes.

Last week, the Trump administration unveiled punishing tariffs on imports of steel and aluminum from the EU, Canada and Japan, among others.

That was met with retaliatory levies from its closest allies, which have raised fears of a trade war and prompted complaints to be filed with the World Trade Organisation (WTO).

In Washington, Trump economic adviser Larry Kudlow told reporters that Trump would press ahead with global tariffs on steel, and allies including Canada and the EU should not expect exemptions.

He denied America’s trade policies left it isolated from G-7 allies, but warned that Trump would “stick to his guns” at the upcoming summit.

“There may be disagreements, I regard this as much like a family quarrel. I’m always the optimist, I believe it can be worked out,” Kudlow said.

“We will do what is necessary to protect the United States, its businesses and its workforce,” he added.

Kudlow also insisted that the US relationship with Canada, in particular, was still “very good.” But observers noted that Trudeau’s pointed rebuke last week, calling for “common sense” to prevail in the US administration, marked a turning point for the worse in the relationship.

CNN said on Wednesday that Trump invoked the War of 1812 in a testy phone call with Trudeau on May 25 about the burgeoning trade row.

According to CNN’s sources familiar with the conversation, Trudeau pressed Trump on his national security justification for the tariffs, to which Trump replied: “Didn’t you guys burn down the White House?” 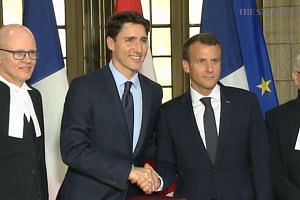 That was actually British troops, and historians say it was payback for an American attack on York, Ontario, which later became a part of Canada.

The United States is reportedly preparing to unleash another round of tariffs on Canada as retribution for its C$16.6 billion (S$17.1 billion) in tariffs on US goods.

“Let us modernise what needs to be modernised,” he added in reference to the WTO. “But let’s also remember that these global rules have allowed all of our economies to prosper.”

Kudlow shot back that “Trump is trying to fix this broken system.”

“It was a good system,” he said, “And it lasted for a bunch of decades, but that system has been broken in the last 20 years plus. The World Trade Organisation, for example, has become completely ineffectual.”