OTTAWA (AFP) - Canada has agreed to sign on to the resurrected Trans-Pacific Partnership along with 10 other Asia-Pacific countries, moving forward with the trade pact after the United States pulled out last year.

The news comes as negotiators from Canada, the United States and Mexico sit down in Montreal for a sixth round of talks aimed at revamping the North American Free Trade Agreement (Nafta).

Canada - the second-largest economy in the TPP - had initially snubbed the proposed trade deal last year, acting as the main holdout in negotiations after US President Donald Trump decided in early 2017 to go it alone under his "America First" policy.

But with Trump also threatening to pull his country out of Nafta and time running out to reach that deal, Canada is in the hot seat to diversify its trade relationships.

A senior government official said Canadian trade envoys met with their counterparts in Tokyo on Monday and Tuesday (Jan 22 and 23) to discuss a revision of the TPP, moving towards creating one of the world's largest free trade blocs.

"We made significant progress on the sticking points that we had identified" on the sidelines of the Asia-Pacific Economic Cooperation (APEC) summit in Vietnam in November, the official said.

A statement from the government of Singapore, which confirmed the deal, said the parties would seek to sign the TPP by early March.

The agreement would incorporate all commitments from the original TPP, except for a limited number of provisions suspended temporarily, and some remaining issues to be finalised.

"At the Tokyo round, senior officials resolved these outstanding issues, finalised the list of suspended provisions, and completed the legal verification of the agreement," according to the statement. 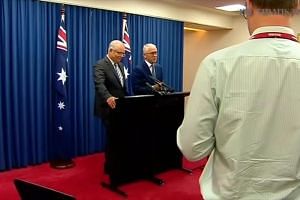 The TPP would eliminate tariffs and non-tariff barriers for goods, improve access for service suppliers in a range of sectors, facilitate greater investments and improve access to government procurement contracts.

"The agreement reached in Tokyo today is the right deal," Canadian Prime Minister Justin Trudeau said at the World Economic Forum in Davos.

He and his trade minister, François-Philippe Champagne, noted stronger and more progressive clauses in the TPP on "intellectual property, culture and the automotive sector." The agreement will also be open for others - such as the United States - who may wish to join in future.

Ottawa had held out to maintain environmental and labour protections linked to freer markets under the TPP deal. Those clauses became much less attractive to countries like Vietnam, Malaysia, Chile and Peru after the US pullout.

China is not included in the TPP, as the pact was initially driven by the former US administration as a counterweight to surging Chinese power in Asia.

The Tokyo TPP talks were only the second since November, when Trudeau failed to show up at a leaders' gathering on the sidelines of the Apec summit to sign an agreement-in-principle.