TORONTO (REUTERS) - Britain's Prince Harry and American girlfriend Meghan Markle made their first formal public appearance together on Monday (Sept 25), with the couple holding hands and watching a wheelchair tennis match at the Invictus Games in Toronto.

Markle, an actress who stars in the TV legal drama Suits, has been dating Harry for more than a year. They both appeared at the Invictus Games opening ceremony on the weekend, but sat apart and were not photographed together.

On Monday, they both wore jeans and sunglasses, but did not escape the notice of the crowd, which cheered their arrival. The pair appeared relaxed and were seen leaning in to share whispered comments during the match, and also turned around and chatted with spectators in the row behind them.

There were about 200 to 300 spectators at the match, which was free to attend.

The Invictus Games are an international sports competition for wounded and sick military personnel founded in 2014 by Harry, younger brother of William, the second in line to the British throne.

The couple's step into the public eye together will likely fuel speculation that marriage is on the horizon and only add to media interest in Markle.

Harry, William and William's wife Kate are a staple of the front pages of British newspapers and gossip magazines, which pore over every aspect of their lives. 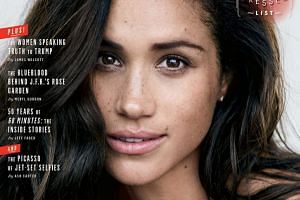 Harry last November criticised the press for subjecting Markle to "a wave of abuse and harassment" after the news of their relationship sparked a stream of stories about the 36-year-old actress in British newspapers, including comment pieces he complained had a racial undertone.

Markle, a divorcee, is a native of Los Angeles whose father is white and mother African-American.

Markle told Vanity Fair magazine earlier this month that she and Harry were in love, in her first direct comments about the relationship.

Her former husband, Trevor Engelson, is reportedly working on a television comedy about divorce and about sharing custody of children after the former wife marries into the British royal family.