BRASILIA (REUTERS) - Suspended Brazilian President Dilma Rousseff vowed on Thursday she would fight to prove her innocence after the Senate voted to put her on trial for breaking budget laws, a historic decision fueled by deep recession and a sprawling corruption scandal.

Rousseff, a leftist in office since 2011, was replaced by her vice president, centrist Michel Temer, who took over as interim president for the duration of a Senate trial that could take up to six months.

Speaking shortly before she left Brasilia’s Planalto presidential palace, Rousseff told supporters she was notified of her suspension on Thursday morning.

She reiterated what she has maintained since impeachment proceedings were launched against her last December by the lower house of Congress.

“I may have made mistakes but I did not commit any crime,”Rousseff said in an angry address, calling the impeachment“fraudulent” and “a coup.”

Rousseff, 68, was flanked by dozens of ministers who were leaving with her administration. Even as many of them wept, Rousseff remained stolid.

“I never imagined that it would be necessary to fight once again against a coup in this country,” Rousseff said, in a reference to her youth fighting Brazil’s military dictatorship.

Shortly afterward, she addressed hundreds of supporters outside, many of them dressed in the red of her Workers Party, and already shouting “Temer out!”

“This is a tragic hour for our country,” Rousseff said, calling her suspension an effort by conservatives to roll back the social and economic gains made by the Workers Party during its 13 years in power.

The party rose from Brazil’s labour movement and helped pull millions of people out of poverty before running into recession and scandal, with many of its leaders tainted by corruption investigations.

The Senate deliberated for 20 hours before voting 55-22 early on Thursday to put Rousseff on trial over charges that she disguised the size of the budget deficit to make the economy look healthier in the runup to her 2014 re-election. 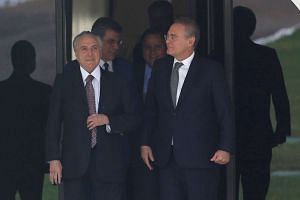 Rousseff, an economist and former member of a Marxist guerrilla group who became Brazil’s first woman president, has steadfastly denied any wrongdoing and has called the charges politically motivated.

Despite her vows to fight, she is unlikely to be acquitted in her trial.

The size of the vote to try her showed the opposition already has the support it will need to reach the two-thirds majority required to convict Rousseff and remove her definitively from office.

“It is a bitter though necessary medicine,” opposition Senator Jose Serra, named on Thursday as the new foreign minister under Temer, said during the marathon Senate debate.

“Having the Rousseff government continue would be a bigger tragedy.”

With Brazil’s economy mired in its deepest recession in decades, the incoming Temer administration sought to show it would act rapidly.

Temer aides said the incoming government would announce a series of austerity measures to help reduce a massive budget deficit.

Rousseff earlier dismissed her Cabinet, including the sports minister, who is in final preparations for the Olympics in Rio de Janeiro in August, Brazil’s Official Gazette showed. The central bank governor, who has ministerial rank, was not included in the decree.

As suspended head of state, Rousseff can continue to live in her official residence, and is entitled to a staff and use of an Air Force plane.

Fireworks erupted in cities across Brazil after the Senate vote.

Police briefly clashed with pro-Rousseff demonstrators in Brasilia during the vote, but the country was calm early Thursday, with scattered celebrants in São Paulo and other cities draping themselves in Brazil’s green, yellow and blue flag.

Temer, 75, a constitutional scholar who spent decades in Brazil’s Congress, now faces the challenge of restoring economic growth and calm at a time when Brazilians, increasingly polarised, are questioning whether their institutions can deliver on his promise of stability.

In addition to the gaping deficit, equal to more than 10 per cent of its annual economic output, Brazil is suffering from rising unemployment, plummeting investment and a projected economic contraction of more than 3 per cent this year.

“Only major reforms can keep Brazil from moving from crisis to crisis,” says Eduardo Giannetti da Fonseca, an economist and author in São Paulo who has written extensively about the country’s socioeconomic problems.

But those changes, including an overhaul of pension, tax and labour laws and a political reform to streamline fragmented parties in a mercenary Congress, could remain elusive at a time of turmoil.

Wild cards remain for Temer himself, including still-pending investigations by an electoral court into financing for his and Rousseff’s 2014 campaign.

Then there is the far-reaching kickback probe around state-run oil company Petroleo Brasileiro SA (PETR4.SA), which has ensnared dozens of corporate and political chieftains, and helped set the scene for the discontent that hobbled Rousseff.