CURITIBA, BRAZIL (AFP) - Brazil's leftist icon Luiz Inacio Lula da Silva served the first day of a 12-year prison sentence for corruption on Sunday (April 8), but was already hoping for a way out through the courts this week in a drama gripping the country ahead of presidential elections.

The 72-year-old, who served two terms as head of state between 2003 and 2010, entered the prison in the southern city of Curitiba late on Saturday (April 7), becoming Brazil's first ex-president to be jailed as a criminal.

His cell is located in the same federal police building that serves as the base of operation "Car Wash," Brazil's wide-ranging anti-graft investigation that brought him down.

Although Brazil's recent presidents have often ended up in trouble - impeached, felled by a coup and even one suicide - Lula is the first to have been convicted and locked up.

Lula was found guilty last year of accepting a luxury apartment as a bribe from a construction company and is the biggest scalp so far of the Car Wash probe. He insists on his innocence and says he was framed to stop him running in October presidential elections in which polls show him as frontrunner.

But there could be new surprises ahead, with a potentially explosive legal development coming as early as Wednesday (April 11) when the Supreme Court could revisit the current law on incarceration during appeals, local media said.

Today, anyone convicted and losing a first appeal, as in Lula's case, must conduct further appeals from prison. 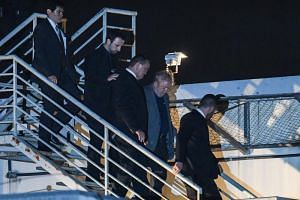 But there is pressure to change that so that higher court appeals could be pursued in liberty, which would mean freedom for Lula.

- From palacio to prison cell -

It has its own private toilet and hot shower.

The cell is located inside the police headquarters in Curitiba, which has become synonymous to Brazilians with the "Car Wash" probe that was launched four years ago and continues to shake the country.

Named after a petrol station where agents initially uncovered a relatively small money laundering operation, "Car Wash" has since morphed into an unprecedented operation that has brought down scores of top politicians and some of Brazil's richest businessmen.

It has also sent shock waves through Latin America, leading to the resignation of Peru's president Pedro Pablo Kuczynski.

As Lula arrived by helicopter on the roof of police headquarters late on Saturday, demonstrators let off fireworks and riot police fired tear gas, filling the air with explosions and smoke.

It was a fittingly chaotic end to four days of tension as Brazil wondered whether the man who founded the Workers' Party would finally be put behind bars.

By Sunday morning, many of Lula's supporters were still in Curitiba, and more were on the way.

"As president Lula is so loved, all of Brazil is coming. As of yesterday we were expecting almost 30 groups," said Regina Cruz, president of the CUT trade union group in Parana state, who said large numbers of people were heading there.

Others expressed satisfaction over his fate, coming to take pictures in front of what they are now calling "Lula's house."

"Let Lula stay there for a long time and all his bunch with him. He deserves it," said businessman Mauro Celli, 49.

"Justice was done in this country," said Glaucio Zeni, 53.

With Lula almost certainly knocked out of October's presidential election, the race is likely to be thrown wide open. In polls, he currently scores more than double his nearest rivals.

However, analysts say that instability in Brazil means that surprises remain possible.