BRASILIA (REUTERS) – Brazilians began voting on Sunday (Oct 7) in a polarised presidential race that could result in the election of a far-right former army captain, whose praise of past dictatorships enrages critics but whose promise of a brutal crackdown on crime and corruption has electrified his supporters.

Front-runner Jair Bolsonaro, whom some call a tropical Trump, has surged in opinion polls in the past week. He is riding a wave of anger at the establishment after the uncovering of one of the world’s largest political graft schemes, opposition to a return to power by the leftist Workers Party (PT) blamed for much of that corruption, and fears about spiking crime in the country with more murders than any other.

But Brazil is split over what cost to its democracy it may pay if it chooses Bolsonaro, a long-time congressman who has repeatedly praised the 1964-85 military regime but now vows to stick strongly to democratic ideals, a conversion many question.

Two polls published late on Saturday showed Bolsonaro had increased his lead over Haddad in the past two days, taking 36 percent of voter intentions compared with Haddad’s 22 per cent. The pair are deadlocked in a likely run-off vote on Oct. 28 that is required if no candidate takes a majority on Sunday.

Polling stations opened at 8am local time (7pm Singapore) and will close at 5pm in all but the far western portions of  Brazil. Exit polls should be broadcast at 7 pm local time and results will start flowing shortly after that because Brazil uses an electronic voting system.

The 147 million voters will choose the president, all 513 members of the lower house of Congress, two-thirds of the 81-member Senate plus governors and lawmakers in all 27 states.  Almost two-thirds of the electorate are concentrated in the more populous south and southeast of Brazil where its biggest cities, Sao Paulo and Rio Janeiro, are located – and where Bolsonaro holds a commanding lead. A quarter of the voters are in the less developed northeast, traditionally a PT stronghold. 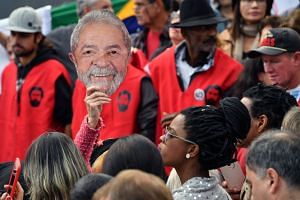 In the most polarised election since the end of military rule in 1985, Bolsonaro is backed by a group of retired generals who have criticised the PT governments from 2003-2016 and publicly advocate military intervention if corruption continues.

In a final appeal for votes on a live Facebook stream on Saturday night, Bolsonaro, 63, called on Brazilians to help him clean up the political system and establish better government of Brazil’s rich mineral and agricultural resources.

“We have everything. What we need are politicians who are committed to their country and not to party interests,” he said from his home, where he is recovering from a near-fatal stabbing at a campaign rally.

He underwent two emergency surgeries and it is not clear how much campaigning he will be able to do if the vote heads into a runoff.  Bolsonaro, who sees himself as a Brazilian version of US President Donald Trump, dismissed as “fake news” accusations that he was sexist, racist and homophobic.

A Bolsonaro government would speed up the privatisation of state companies to reduce Brazil’s budget deficit and relax environmental controls for farming and mining. It would also block efforts to legalise abortion, drugs and gay marriage.  Haddad, who has presented himself as a fiscally responsible moderate, spent the last day of the campaign targeting undecided voters in the Bahia state in Brazil’s northeast, the heartland of the PT’s support, but where Bolsonaro has made gains in polling.

Haddad took Bolsonaro to task for skipping the last presidential debate on Thursday, which other candidates said was a sign he was unprepared to govern. Bolsonaro said he could not attend on the orders of his medical team.

The PT candidate said Bolsonaro wants to “win in the first round vote without having to debate the issues and that is bad for democracy.”