SAO PAULO (AFP) - Brazil's presidential candidates made their final push for voters on Saturday (Oct 27), with pitches that echoed the gulf between them: leftist Fernando Haddad held a "peace rally" in the favelas, while far-right front runner Jair Bolsonaro took to Twitter.

A day before a run-off that will decide who leads Latin America's biggest country for the next four years, Brazilians are deeply divided - though the clear favourite is Mr Bolsonaro, 63, a former army captain nicknamed the "Tropical Trump", whose aggressive social media campaign has tapped into widespread anti-establishment rage.

Two final polls published on Saturday gave Mr Bolsonaro a lead of between eight and 10 percentage points, with around 55 per cent of the vote.

Mr Haddad has made up ground - he trailed by as much as 18 points two weeks ago - but it would take a truly dramatic surge for him to win at this point.

Mr Haddad is standing in for former president Luiz Inacio Lula da Silva, a popular but controversial politician who was barred from running while serving a 12-year jail term for corruption.

The Workers' Party candidate insisted in an emotionally charged rally that he can still pull off a comeback.

"This thing is going to turn around," Mr Haddad, 55, told a crush of thousands of white-clad supporters in the largest shantytown in Sao Paulo, a city he formerly served as mayor. 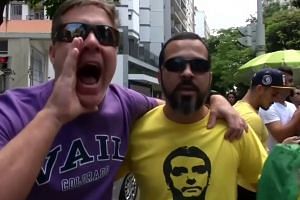 "Brazil still remembers," he added - a pointed reference to Mr Bolsonaro's outspoken nostalgia for the military regime that ruled Brazil with an iron fist from 1964 to 1985.

"Democracy is going to win, not authoritarianism. We don't want another dictatorship." 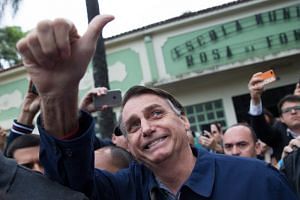 Mr Haddad is promising voters a return to the golden years under Lula, who slashed poverty while presiding over an economic boom from 2003 to 2010.

But that was before the economy went bust and the Workers' Party, along with most political parties, got bogged down in the slime of several massive corruption scandals.

Mr Bolsonaro harks back to a different past - that of the "Brazilian miracle" of rapid industrialisation under the efficient but brutal military dictatorship.

In a country disgusted with massive corruption, violent crime and economic malaise, his message has sold better than Mr Haddad's.

He has also successfully presented himself as an anti-establishment outsider, despite the fact he has served in Congress for the past 27 years.

But he repulses a large part of the electorate - and many outside the country - with his overtly misogynistic, racist and homophobic rhetoric.

He once told a lawmaker he opposed that she "wasn't worth raping"; he has said he would rather see his sons die than come out as gay; and he said after visiting one black community that they "do nothing - they're so useless I doubt they can procreate".

Mr Bolsonaro made his final campaign pitches on Saturday on social media - as he has done since he was stabbed in the stomach by an assailant at a rally last month.

"God willing, tomorrow will be our new independence day," he wrote on Twitter.

Hundreds of backers meanwhile held motorcades to show their support, waving Brazilian flags as they paraded through the streets of Sao Paulo.

"We worked hard to clean up Brazil, to rip Brazil from the communists' hands, and now we're entering a new era in Brazilian history," said one, Dorival Andrade.

Mr Bolsonaro softened his tone in the final hours.

"We went a free Brazil, without prejudice: white or black, homo or hetero," he said in a Facebook Webcast, accompanied by black lawmaker Helio Negao.

"Who knows, maybe I'm gay. If I were, what would be the problem?" He fended off accusations of authoritarianism, vowing to respect the constitution.

"For the first time in 32 years of exercising my right to vote, a candidate scares me. That's why I will vote for Fernando Haddad," he tweeted.

But the man who came third in the first-round vote on Oct 7, centre-leftist Ciro Gomes, refused to endorse either candidate - a blow to Mr Haddad.