RIO DE JANEIRO (NYTIMES) - President Jair Bolsonaro of Brazil on Friday (Aug 2) fired the head of a government agency that had revealed a big increase in deforestation in the Amazon, with the dismissal inciting protests from environmental organisations and public workers.

The sacking of Ricardo Magnus Osório Galvão, a well-respected physicist, came a day after Bolsonaro angrily claimed that people within the government were damaging the country's image abroad by disclosing the rate at which the world's largest tropical rainforest is withering.

Bolsonaro and his minister of the environment, Ricardo Salles, on Thursday had held a news conference during which they cast doubt on his own government's figures, which are routinely released monthly, that showed a steep rise in deforestation in the Amazon this year.

"The numbers, as I understand it, were released with the objective of harming the name of Brazil and its government," Bolsonaro told reporters, speaking alongside Salles.

Brazil's portion of the Amazon lost more than 1,330 square miles of forest cover during the first six months of this year, a 39 per cent increase over the same period last year. 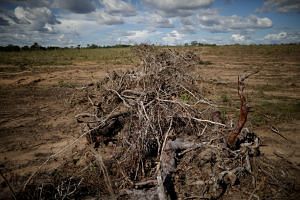 Brazil deforestation up nearly 90% in June under President Bolsonaro

Amazon is Brazil's, not yours, President Jair Bolsonaro tells Europeans

Bolsonaro's rise to the presidency has represented a significant shift for Brazil, which in the recent years before his election had made considerable strides in curbing deforestation and had played a high-profile role in global debates about climate change.

Bolsonaro, a far-right former Army captain, has said protected indigenous territories should be opened up to mining and other industries. Last week, he called concerns about the environment overblown, saying the issue mattered solely to "vegans, who eat only plants."

A number of senior officials in his administration, however, including the foreign minister and a former general in charge of national security, have grown concerned amid a series of reports by foreign news organizations about deforestation and environmental policy in the Bolsonaro era.

A front-page story in The New York Times on Sunday about rising deforestation in the Amazon was followed by an editorial in The Guardian that called on European leaders to press Brazil on conservation efforts as part of a trade deal between the European Union and a bloc of South American nations.

Later in the week, The Economist published a cover story with the headline "Deathwatch for the Amazon" that included an image of stubs of fallen trees, including one in the shape of Brazil.

Galvão's dismissal from his role leading the National Institute for Space Research, which is responsible for tracking deforestation of Brazil's enormous rainforest, was not entirely unexpected.

Two weeks ago, Bolsonaro told journalists he believed the space agency issued false figures and accused its head of acting "on behalf of some" nongovernmental organization. That claim was unfounded.

Galvão responded forcefully to that statement, saying in an interview with a Brazilian news organization that the president "had a vile, cowardly attitude in making those remarks in public, perhaps hoping that I would step down, but I'm not going to do that." In a separate interview, Galvão said he was stunned by the president's attack on the work of government scientists. He said in a televised interview that Brazil's environment monitoring system dates to the 1970s and is renowned around the world.

Salles said Thursday that the government will develop a system to more accurately measure deforestation. He did not explain in detail what that would entail.

The president's office did not explain Friday why Galvão lost his job. It referred reporters to a statement from the Ministry of Science, Technology, Innovation and Communication regarding the dismissal. The statement hailed Galvão's professionalism and job performance.

Galvão had been appointed for a four-year term that began in September 2016. Such appointments may be cut short if a minister loses confidence in an agency head.

Career employees at the space monitoring agency held a protest Friday afternoon in São Paulo, according to local news reports.

Márcio Astrini, public policy coordinator at Greenpeace, called Galvão's dismissal an "act of vengeance against someone for telling the truth."

He accused the Bolsonaro government of implementing policies that "throttle the state's capacity to combat deforestation and favor those who commit environmental crimes."

Carlos Nobre, a Brazilian scientist who is among the world's foremost experts on climate change, called the firing a clear effort to "kill the messenger of bad news."

He said, however, that the firing of Galvão, whom he called a "well-respected Brazilian scientist of international reputation," could have a silver lining.

"This whole issue brings the question of the increase of Amazon deforestation to the headlines and wakens global interest on the future of the forest," Nobre said.