BOGOTA (BLOOMBERG) - After days of preparation, the trucks rolled out on Saturday (Feb 23). They bore beans, rice, sugar, salt and the possibility that Venezuela's army would desert autocratic President Nicolas Maduro and the moribund nation might begin its revival.

Instead, Saturday brought violent action but little motion. Mr Maduro avoided a bloodbath despite a massive border face-off between protesters and soldiers.

His army didn't desert him. While opposition leader Juan Guaido failed to start the flow of relief, he demonstrated vividly that the regime would attack its own citizens and spurn food even as people starve.

Late on Saturday, Mr Guaido said he would formally urge the international community to consider "all options" to liberate the country. He made the decision after Saturday's events, according to a post on his Twitter account.

At least four died in chaotic clashes and about 60 members of the armed forces defected along the borders of Colombia and Brazil, where food and medicine is stockpiled. But Saturday ended much as it began: Trucks of humanitarian aid donated by nations backing Mr Guaido's bid for power idled just outside the country and Mr Maduro resumed taunting his rivals, crowing about victory back in Caracas.

"I am stronger than ever," the socialist strongman said in an impassioned and expletive-laden speech that whipped die-hard supporters into a frenzy.

"Standing, ruling our homeland, for now, and for many years."

Mr Guaido, who is head of the National Assembly, tried to bring in aid on Saturday for humanitarian reasons, but also to show that military support for Mr Maduro was crumbling.

Now, with shipments repelled in a haze of tear gas and smoke, he must plan with his key allies - the United States, Colombia and Brazil - how to pressure the regime anew.

And having sneaked into Colombia hours before the attempted push across the border, Mr Guaido faces the additional challenge of returning as Mr Maduro threatens to imprison him for violating a travel ban.

"We saw today a man who doesn't care about Venezuela, ordering to burn food for the hungry and medicine in front of the sick," Mr Guaido told reporters, adding that Mr Maduro "has chosen the worst of paths, the path of crime and extermination".

For Mr Maduro, Saturday's victory comes with great risk. US President Donald Trump and other leaders had insisted that he must let the aid in, and his refusal is likely to bolster their resolve to topple his rickety government. 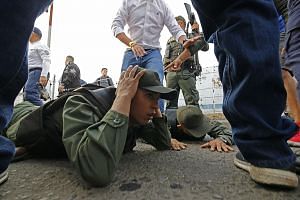 America along with dozens of other nations have recognised Mr Guaido's claim that the Constitution makes him acting president because Mr Maduro stole his re-election last year.

Mr Guaido, whom the National Assembly has vested with executive powers based on the Constitution, said he would participate in the Lima Group summit held in Bogota, Colombia, on Monday, where he expects to meet US Vice-President Mike Pence to discuss the next diplomatic move.

The push from Colombia began on Friday with a music festival organised by Sir Richard Branson in the border town of Cucuta, which drew more than 300,000. Many remained and, early the next morning, began confronting Venezuelan troops stationed on the area's four international bridges.

In late morning, 14 trucks of aid began leaving a warehouse and rolling slowly toward the bridges, with dozens of Guaido supporters on top waving Venezuelan flags and chanting "Freedom!" and "Yes, we can!"

On the Simon Bolivar Bridge, Mr Guaido's supporters approached a phalanx of Venezuelan guardsmen, trying to get them to clear a path for the delivery. Instead, they fired tear gas.

On another bridge, two aid trucks approaching the Venezuelan side were promptly set on fire as volunteers frantically unloaded their cargoes.

In early afternoon, order broke down, and beneath the Simon Bolivar Bridge, Maduro opponents fought his supporters with stones and Molotov cocktails. The Venezuelan National Guard fired gas down into the riverbed to keep the opposition at bay and opened fire with anti-riot projectiles.

One shirtless man on the Colombian side went down, hit in the stomach, and was carried to an ambulance.

"We've been here since 9am," Mr Jeison Brito, a 53-year-old Venezuelan street vendor and Maduro opponent, said on Saturday evening. "My arm hurts from having thrown stones all day. I'll keep fighting to the end, and if necessary, until death. This fight isn't for me, it's for my children and my grandchildren."

The battles in Venezuelan border towns across the dry bed of the Tachira River were still more vicious.

In Urena, stand-offs grew into a full-scale urban battle. Guardsmen fired tear gas on Venezuela's Women in White, a religious group that tried to reach a crossing. As elderly women and nuns gasped, demonstrators barricaded streets with burning tires and hijacked red government buses - setting one ablaze - to use as battering rams to break the line of soldiers guarding the bridge.

Residents dove into doorways or burst into strangers' homes. Medics tending to the wounded crouched and raised their hands in the air.

The violence wasn't restricted to Cucuta and its satellites. In a remote area of Venezuela near a border crossing into Brazil, there were deadly clashes.

Shooting broke out in the town of Santa Elena de Uairen as troops tried to control the area. Three people died on Saturday and one Friday, said Mr Alberto Brito, the head of the local disaster relief agency. At least were 34 wounded.

Venezuelan ambulances carrying victims to Brazilian hospitals were the only vehicles allowed to cross the border point of Pacaraima, Brazil.

Nowhere did aid get through in significant quantities. In Pacaraima, two aid trucks made it to a border zone that is technically in Venezuela, but went no farther. Mr Tomas Silva, a Guaido representative, told reporters that they put plans to cross on hold and that a camp may be built at the crossing point until the aid is allowed to enter.

A ship carrying humanitarian aid from Puerto Rico had to abandon the area after threats of bombardment from the Venezuelan navy, according to a statement from the governor's office of the US commonwealth.

"(We have) notified our partners in the US government about this serious incident. We are in talks to determine the best course of action moving forward," Governor Ricardo Rossello said in a statement.

Sunday seems likely to be a day for formulating fresh plans, but on Saturday night, a tense calm fell over the Venezuelan border as protests subsided.

While some residents began to mill about streets, traffic was blocked on the main road that connected towns with international bridges. Patrols of colectivos, special police and guardsmen did laps around San Antonio del Tachira with weapons drawn.

The day's rage died hard. A member of the Venezuelan national guard was surrounded by lynch mob on the bridge to Urena about 7pm. Colombian police took her away in a patrol car to save her life.

Two aid trucks burned to their chassis on the span, illuminating the night as demonstrators torched a huge poster bearing the face of Mr Maduro.