CHERAN, MEXICO (AFP) - As Mexicans prepare to cast their ballots on Sunday (July 1), the people of Nahuatzen, an indigenous village tucked into the country's western mountains, are busy blocking the street with bonfires to keep out electoral authorities.

Similar scenes have played out in several states across the country - a rejection of a system that indigenous Mexicans say only serves to pick the next batch of corrupt politicians who will plunder their communities.

The indigenous Purepecha people of Nahuatzen sip coffee as they warm themselves by the large bonfires, standing guard against any attempt by the National Electoral Institute to set up a polling station in the village.

"We're ready for them if they come," said one man on night watch, after the Michoacan state government announced it would launch a military and police operation to guarantee the vote statewide, by force if necessary.

Thousands of indigenous Mexicans have blocked highways and protested against the elections in recent weeks, angry over corruption, drug cartel violence and the pillaging of their ancestral lands.

Their inspiration is the village of Cheran, a Purepecha community in Michoacan that made history by suing for the right abolish elections and set up its own system of government, complete with its own police force.

They took their case all the way to the Supreme Court, and won in 2011 - essentially becoming a tiny state within a state. 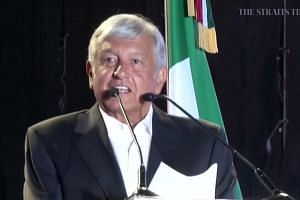 Obrador tipped as next president of Mexico

Instead of a mayor and city council, Cheran now has an Assembly that includes the entire community, and 12 representatives who form a so-called Great Communal Council - chosen without campaigns, parties or ballot boxes.

Instead, Cheran's 5,000 inhabitants crowded into a village schoolyard last month to elect their 12 "keris" (great ones).

Just like their ancestors, women in traditional "rebozo" shawls and men in huarache sandals raised their hands to cast their votes for their chosen leaders.

"No to servitude and slavery! Yes to victory!" shouted a woman trying to organise the chaotic event - the third such vote the village has held since winning its court case.

Cheran brought the lawsuit after the chronically corrupt Institutional Revolutionary Party (PRI) - Mexico's current ruling party - won the elections to govern the municipality where the village is located in 2008.

As happens all too often in Mexico, the new mayor, Mr Roberto Bautista, proceeded to fill his government with cronies and strike a dirty deal with a local mafia - in this case, illegal loggers armed with machine guns who sowed terror in Cheran.

"There were daily shootouts, right in the middle of the street," recalled Ms Irma Campos, a retired teacher.

The first ones to rise up were village women.

Offended by the destruction of their forest, they started a protest movement that ultimately led the village to banish all politicians, disband the corrupt police, launch a new community police force, and reforest more than 8,000 pillaged hectares.

"I'm happy with this new government, and our struggle to use our own customs. Now we don't have to walk around in fear," said Ms Campos, 59.

"It's the same as it was with the political parties, only worse," said Mr Salvador Queandon, a farmer in a straw hat, who alleged that logging cartel thugs have now infiltrated the community police force.

Other indigenous communities embraced the national elections this year, after a reform that allowed independents to run.

That cleared the way for an indigenous Nahuatl woman named Ms Maria de Jesus Patricio, or Marichuy, to launch a presidential bid.

Her candidacy was backed by the Zapatista National Liberation Army, a demobilised guerrilla group that rose to prominence in the 1990s for launching an armed insurrection against the Mexican state.

But this cautious embrace of the political system by some of its fiercest critics ended bitterly: despite mounting a national grassroots campaign, Marichuy failed to gather the 860,000 signatures needed to get on the ballot - a bar critics said was set far too high.

"These are elections for the political class. There's no room, and never will be, for voices from below," said the Zapatistas.

"The power these candidates are trying to win is rotten."