Mr Macri said Argentina is investigating the incident, which began with an as yet unexplained fault in its power grid that led to outages in Argentina, Uruguay, Brazil, Chile and Paraguay.

Though a cyber attack is not the primary hypothesis, it cannot be ruled out, Argentine Energy Secretary Gustavo Lopetegui told reporters in Buenos Aires.

In a series of comments on Twitter, Mr Macri said: "This morning, a fault in the coastal transmission system caused a power outage in the entire country, whose cause we cannot yet determine precisely.

"This is an unprecedented case that will be thoroughly investigated."

Paraguay's National Electricity Administration said the breakdown began with an unexplained event in Argentina's power network, which led to a fault that disconnected all generators at the Yacyreta hydroelectric dam from the regional grid on Sunday morning. The dam is located on the border between the two countries and is a joint project of the pair. 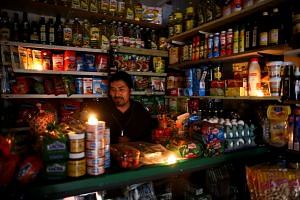 Underscoring the vulnerability of cross-border grids to local glitches, the outage disrupted regional elections in Argentina and cut off power for millions in South America's second-biggest economy.

The integrated nature of the regional grid meant that the interruption also affected Brazil, Chile and Paraguay, Uruguayan state utility UTE said in a statement.

That chain of events was "abnormal", Mr Lopetegui said.

Electricity was restored in about half of the affected areas in Argentina by 2.30pm, more than seven hours later, according to the Energy Ministry.

Power is gradually returning to Buenos Aires and its greater capital region.

Power has been restored to 88 per cent of clients in Uruguay, according to state-owned utility UTE.

The blackout delayed voting on Sunday in gubernatorial elections in Argentina's provinces of Santa Fe, Formosa, and San Luis.

Voters marked ballots by candlelight or using their mobile phones as flashlights amid an "emergency protocol", newspaper Clarin reported.

Gubernatorial elections in Tierra del Fuego in the south were unaffected by the outage because the province is separate from the rest of the country's grid.

Businesses that were normally open on Sundays stayed shut.

"When I started my work, we didn't have any electricity in the building, the streets were empty, not a single business was open," Buenos Aires resident Maria Carrera said by phone around noon.

"I haven't been able to cook breakfast, and we still don't have any power."

The outage was set off by a fault affecting Yacyreta's transmission system, causing power to be cut automatically and triggering a grid failure at 7.07am in Argentina, the Energy Secretariat said.

That incident led to generators at a hydroelectric plant on the border of both Paraguay and Argentina suddenly going off-line.