BUENOS AIRES (REUTERS) - Alberto Fernandez has already pulled off something of a coup. The fixer and confidante of presidents, little known outside Argentine political circles just five months ago, is set to take on the top job in Latin American's No. 3 economy.

The moderate Peronist, a fan of Bob Dylan after whom he named his brown-and-white collie, will now need to pull off an even tougher maneuver, with the country gripped by default fears, inflation and flat-lined growth.

Argentine voters cast their ballots on Sunday (Oct 27), handing Fernandez an outright win over incumbent Mauricio Macri, a meteoric rise for the university professor who was announced as a candidate in May by his higher-profile running mate, ex-leader Cristina Fernandez de Kirchner.

"Alberto is a person who is in the right place at the right time," said former Foreign Minister Jorge Taiana, who between 2003 and 2008 served in the same Cabinet as 60-year-old lawyer and teacher Fernandez.

"He is an intelligent man, with good training, who listens, who dialogues, who defends his point of view," Taiana told Reuters. "I never saw him have a dogmatic position."

Those negotiating skills will be key. Beyond the election, the country is set for complex discussions with its creditors, including the International Monetary Fund (IMF), after a crash in the peso currency left Argentina on the edge of default as reserve sunk and borrowing costs jumped.

That crash was sparked ironically by Fernandez's own, unexpected landslide victory in a primary election vote against Macri in August, as investors worried about his populist running mate and question marks over Fernandez's own policy views.

TIMES THEY ARE A-CHANGIN'

He has continued to oversee exams until this month at the University of Buenos Aires where he teaches. 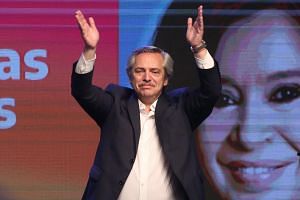 Argentina's Peronists sweep back into power as Macri ousted

In a reflection of his chameleon-like mutability, Fernández has been both a lawmaker for Buenos Aires in a party of neo-liberals, a Peronist chief of staff and part of the Radical Civic Union party in the 1980s.

That's reflected in an eclectic taste in music. Behind the austere mustache and formal suit he wears as a law school professor, Fernandez hides a rock-loving musician who turns to the guitar every time Argentine politics lets up.

He is a "music freak, a very cultured guy," Argentine rock pioneer Lito Nebbia - an idol and later a friend - said about the Peronist candidate in a radio interview this year.

Asked about his ideological influences, Fernández said in a radio interview they included more obvious political thinkers such as former president Juan Peron, the ideological father of Peronism, but also a string of South American and North American musicians.

"But there's also a lot of Nebbia, Bob Dylan, Joan Báez, and El Flaco (Luis Alberto) Spinetta," said Fernandez, who as a 16-year-old teenager grew his mustache in honor of Nebbia and even took guitar lessons with him.

Dylan, the American songwriter behind "Blowin' In the Wind" and "The Times They Are A-Changin'" even inspired the name of his collie, which itself has a huge fan base on social media and is often seen alongside Fernandez.

A big question for many - investors, farmers and voters - has been how burnished are Fernandez's Peronist credentials: ranging from fears he could be a puppet for more extreme "Kirchnerist" views to worries he's not Peronist enough.

Peronism is a broad political movement that spans across the political spectrum but is grounded in an idea of "social justice".

"I don't like him. In his head he's not a Peronist. Alberto's economics are neo-liberal," Guillermo Moreno, a former secretary of commerce who was in the Cabinet with Fernandez for years, said earlier this year.

Fernández, raised in a family of lawyers, has worked within Peronism for years. He was Chief of Staff under husband-and-wife pair Néstor Kirchner from 2003-2007, and the first year of Cristina Fernández, who ruled from 2007 until 2015.

Fernandez is also a fanatic for Argentinos Juniors soccer club, whose stadium stands a few blocks from the house where he grew up in the Villa del Parque neighbourhood of Buenos Aires.

The relationship with his running mate is also complex. He was sharply critical of Cristina Fernández during her administration, which saw the introduction of populist policies including currency controls, as well as limits and taxes slapped onto farm imports.

The pair reconciled last year and have used their differences to great effect to sweep back into the Casa Rosada presidential palace. Whether it lasts is another question.

"Until the (mid-term) elections in 2021 there will be no problems, the alliance will be maintained. But I don't know what will happen in 2023," a source close to Fernández de Kirchner told Reuters, referring to the next general election.

For now, Fernandez is basking in the glow of leading what was a fragmented Peronist opposition back to power.

"Alberto is just the best candidate," deputy José Luis Gioja, leader of the Peronist Justicialist Party (PJ), told Reuters. "He greatly helped the unity of the PJ and the country's progressives."