JOHANNESBURG (REUTERS) - Two lions rescued from circuses in Colombia and brought to a South African refuge in April have died, the organisation that arranged the rescue and airlift operation said on its website.

Animal Defenders International (ADI) said the lions died from a botulism toxin to which most lions are resistant. Other cats in the group were also exposed to the toxin but responded positively to treatment.

"It is with great sadness that Emoya Big Cat Sanctuary and Animal Defenders International announce the passing away of Rapunzel and Kala, two of our 33 lions rescued from South American circuses," ADI said on its website.

The 33 lions were flown in to the 5,000-hectare reserve on a private estate in April. Twenty-four of the animals were rescued from circuses in Peru, while nine were voluntarily surrendered by a Colombian circus.

ADI said both countries have banned the use of wild animals in circuses. 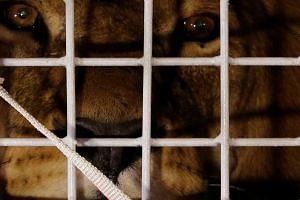 The lions would not survive in the African wild as many have been declawed or have had teeth smashed or removed. One is almost blind and another is missing an eye.

Four of the rescued lions recently required treatment at a veterinary hospital after exhibiting symptoms of botulism, according to ADI. Two have recovered and have been returned to the sanctuary.