JOHANNESBURG (REUTERS, BLOOMBERG) - The African National Congress (ANC) faces its toughest electoral test on Wednesday (May 8), seeking to reverse a slide in support from voters frustrated by rampant graft and racial inequalities a generation after it won power in South Africa's first all-race poll.

Voting for the 400-member National Assembly and nine provincial legislatures will close at 9pm local time (3am on Thursday, Singapore time). Final results are scheduled to be released by Saturday, and a first meeting of the new Parliament has been provisionally set for May 22. The president is officially elected at that sitting.

"I'm a member of the ANC but I didn't vote for them this time," Mr Thabo Makhene, 32, who works in construction, said at a polling station in the commercial hub of Johannesburg. "They need to catch a wake-up. The way they run the state, mishandling state funds, they've lost their morals."

The national election is the first under President Cyril Ramaphosa, who replaced scandal-plagued Jacob Zuma as head of state in February 2018 after four years as Mr Zuma's deputy.

He took over from Mr Zuma as ANC leader in December 2017 and is trying to restore faith in the governing party once led by Mr Nelson Mandela after its image was tarnished during Mr Zuma's decade-long leadership. 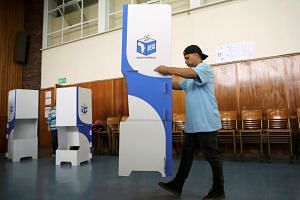 South Africans head to polls tipped to be won by ANC

The ANC, which has governed South Africa since the end of white minority rule in 1994, won 62 per cent of the vote in 2014's parliamentary election, down from 2009 and below its best result - 69 per cent in 2004 under President Thabo Mbeki.

While opinion polls point to the ruling ANC extending its rule, Mr Ramaphosa needs a decisive win to quell opposition in his faction-riven party to push through reforms needed to spur growth in Africa's most-industrialised economy. A narrow victory could embolden his critics and may force the party into coalitions to retain control of some provinces, limiting his policy options.

"The margin is extremely important," said Ms Melanie Verwoerd, an independent analyst and former ANC lawmaker. "It will be significantly more dangerous and difficult for Ramaphosa to deal with his detractors within the ANC should the result fall below 55 per cent. Anything above 57 per cent would make it increasingly difficult for his detractors to act against him."

Since taking office, Mr Ramaphosa has spearheaded a drive to lure US$100 billion (S$136 billion) in new investment, and appointed new managers to oversee several mismanaged government institutions and companies.

Surveys show Mr Ramaphosa is way more popular than his party and his main rivals, with one recent poll by research company Ipsos putting his approval rating at 65 per cent.