LIBREVILLE (REUTERS) - Gabon's capital Libreville erupted into a second day of violent protests on Thursday (Sept 1) sparked by a disputed election, with at least three dead and hundreds arrested after the challenger rejected results that gave President Ali Bongo a narrow victory.

Interior Minister Pacome Moubelet Boubeya said three people had been killed and up to 1,100 arrested across the West African country of 1.8 million, one of the continent's top oil producers.

Bongo said the electorate had given its verdict, and described the camp of challenger Jean Ping - a former close ally of the Bongo family - as "a small group whose only aim is to take power for themselves."

Ping, who dismissed Wednesday's result as fraudulent, told Reuters in an interview that two people were killed and others wounded when the presidential guard attacked his party headquarters overnight. 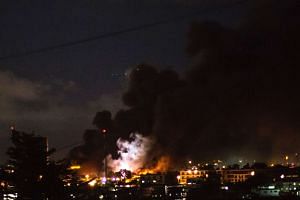 He called for international assistance to protect the population against what he described as "a rogue state".

The result extends for another seven years the Bongo family's half-century grip on power in a country where oil accounts for about 60 per cent of gross domestic product.

Bongo's office accused the Ping camp of planning"coordinated attacks on symbols of the state", adding that security forces had in response encircled Ping's headquarters and clashed with his supporters, resulting in one death.

On Thursday, one witness reported hearing gunfire and blasts in the Nkembo neighbourhood, near the city centre, while another saw protesters loot shops, turn over rubbish bins to block streets and smash cars in the Avea neighbourhood.

"This is just a consequence of the current situation. This is because of the victory of Bongo against Jean Ping," said witness Alex Mbadinga, 32.

Libreville residents said that the Internet was cut on Thursday. Social networks, including Twitter and Facebook, stopped functioning overnight. Earlier in the week, customs officials seized satellite telephones they said had been imported illegally.

French Foreign Minister Jean-Marc Ayrault said there was no room for violence within the political process.

The office of French President Francois Hollande also called for calm, which "means a process to ensure transparency in the election results."

"Everybody knows that I won the election," Ping told Reuters, adding the electoral commission's figures were fraudulent. "The (Bongo) family are repeating the same scenario for almost half a century. The opposition can win the elections but they have never had access to power."

Bongo won 49.80 per cent of votes in Saturday's election against 48.23 per cent for Ping, according to results read by Moubelet Boubeya on Wednesday, after the announcement was delayed by one day.

"This victory by such a tight score obliges... each of us to respect the verdict of the ballot box," Bongo said in the text of a speech distributed to reporters late on Wednesday.

Bongo was elected in 2009 upon the death of his father Omar Bongo, who ruled Gabon for 42 years. He benefited from a patronage system lubricated by oil money ahead of the vote.

But economic headwinds caused by falling oil prices and crude production have led to budget cuts in one of Africa's wealthiest nations, providing fuel for opposition charges that Gabon's citizens have suffered under his rule.

The government says it plans to diversify the economy through investments in manganese mining and cash crops like palm oil and rubber.

Ping, a political insider who has served as foreign minister and African Union Commission chairman, was a close ally of the late president and fathered two children with his daughter.

An EU observer mission criticised a "lack of transparency"among institutions running the election and said Bongo had benefited from preferential access to money and the media.