WASHINGTON (REUTERS) - A piece of debris found along the eastern African coast between Mozambique and Madagascar may be from the tail section of the Malaysia Airlines plane that disappeared two years ago, NBC News reported on Wednesday (March 2).

Citing United States, Malaysian and Australian investigators who have looked at photos of the possible debris, NBC said the piece could be a horizontal stabiliser from a Boeing 777, the same type of plane as the flight MH370 aircraft that was en route to Beijing from Kuala Lumpur when authorities lost track of it in March 2014.

Reuters could not immediately confirm the report, and Mozambican authorities have no information on the sighting of such an object off the coast of Inhambane province, according to Interior Ministry spokesman Inacio Dina. The US National Transportation Safety Board declined comment, and referred questions to the Malaysian authorities who oversaw the investigation. 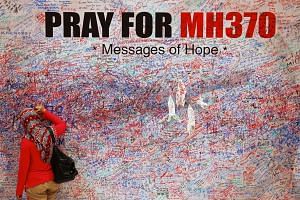 Malaysia’s transport minister Liow Tiong Lai said that based on early reports there was a high possibility that it could belong to the missing jet. But he added that he could not conclude it was from MH370.

In a post on Twitter on Wednesday (March 2), he said Malaysian authorities were working with Australian counterparts to retrieve the debris. "I urged everyone to avoid undue speculation as we are not able to conclude that the debris belongs to MH370 at this time," he wrote.

Based on early reports, high possibility debris found in Mozambique belongs to a B777. (1/3)

It is yet to be confirmed & verified. @dca_malaysia working w Australian counterparts to retrieve the debris. (2/3)

I urged everyone to avoid undue speculation as we are not able to conclude that the debris belongs to #mh370 at this time. (3/3)

NBC said the debris was found on a sandbank in the Mozambique Channel by an American man who has been tracking the investigation into the missing flight.

Engineers who have looked at the debris have said there is a good chance it belonged to MH370, NBC said, citing sources close to the investigation.

NBC cited sources as saying the piece looks like it belongs to a Boeing 777 and that Boeing engineers were examining the photos.

Australian authorities told NBC they were arranging for an investigation of the piece, which could have drifted to the sand bar. Authorities there have said they are stepping up their search for the missing plane, which had been carrying 239 passengers.

The report comes after authorities said last year that they had found a piece of the plane's wing on the shore of Reunion island in the Indian Ocean on the other side of Madagascar.

Authorities have said other reported debris was not wreckage from flight MH370.