JOHANNESBURG (AFP) - The private life of South Africa's embattled President Jacob Zuma, who resigned after intense pressure from his own party, was as colourful as his political career.

A proud traditionalist, he was fond of swapping tailored suits for full leopard-pelt Zulu warrior gear, engaging in energetic ground-stomping tribal dances during ceremonies in his village.

At party rallies, he was often the first to break into tuneful song.

In the past, he relished leading supporters in the rousing anti-apartheid struggle song "Umshini Wami" (Bring Me My Machine Gun), which became his signature tune.

The teetotaller and non-smoker has four wives and at least 20 children.

Before taking office, Mr Zuma dismayed the nation during his 2006 rape trial when he told the court he had showered after having unprotected sex with his young HIV-positive accuser to avoid, he said, contracting the virus.

The claim incensed safe-sex campaigners - not least because Mr Zuma was head of the country's AIDS council at the time.

Mr Zuma was acquitted of rape but was often mocked in newspaper cartoons and depicted with a shower nozzle sprouting from his bald head.

At Mandela's memorial service in 2013, he was loudly booed by ordinary South Africans in front of world leaders.

Now aged 75, the former herdboy who fought in the anti-apartheid struggle, clung on to the presidency for as long as he could, despite a string of scandals.

He survived by building a network of loyal African National Congress (ANC) lawmakers and officials, and by trading on the party's legacy as the organisation that ended white-minority rule.

Among the stains on his presidency which ended when he resigned on Wednesday (Feb 14) was perception that he fostered a culture of government corruption.

He is also accused of having led the country into a quagmire of low growth, huge debt and record unemployment.

He stood down as ANC party chief at a conference in December but refused a party request to stand down as head of state a week-and-a-half ago, prompting his party to recall him. 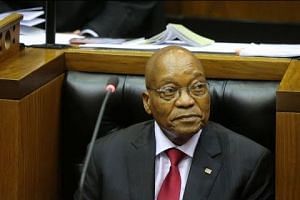 On Wednesday, Mr Zuma bowed to the inevitable and resigned "with immediate effect".

As leader of the late Nelson Mandela's ANC party, which has won every election since South Africa became a democracy in 1994, Mr Zuma easily won a second five-year term in 2014.

The son of a domestic worker, he had "a very strong appeal" to the working class and the poor, said Mr Sdumo Dlamini, head of the Confederation of South African Trade Unions (Cosatu), an ANC ally.

"He is a people's person and he has grown through the ranks of the working class. He knows the suffering of the ordinary folk." .

Popularly referred to as "JZ", the uneducated youngster rose through the ranks of the then-banned ANC, serving a 10-year stint as an apartheid-era political prisoner on Robben Island along the way.

After fleeing into exile, he became the party's feared head of intelligence, charged with dealing with traitors and informants.

When he took the reins of the ANC in 2007 in a party putsch against ex-president Thabo Mbeki, Mr Zuma inherited a movement riddled with divisions.

Tensions have only deepened as the ANC has been accused of losing its moral compass.

As criticism of his reign mounted, Mr Zuma maintained a cheerful public facade, often chuckling when allegations against him were repeated.

But he was significantly weakened as increasingly senior ANC figures criticised him in public.

He was forced into a humiliating climbdown in 2015 after firing a respected finance minister and appointing a man widely seen as a stooge.

In a tussle that symbolised his tenacious grip over the ANC, Mr Zuma fought on and finally got the finance minister of his choice in March 2017 when Mr Gordhan was ousted in a midnight reshuffle.

In 2016, Mr Zuma agreed to pay back some of the public money spent on his private residence at Nkandla - backing down in the face of a stinging Constitutional Court rebuke.

He has also been accused of corrupt dealings with the Guptas, a wealthy family of Indian origin, and allegedly granted them influence over his cabinet appointments.

That scandal also reached a climax on Wednesday when elite corruption police arrested several people at the Gupta compound in Johannesburg.

Mr Zuma's tense relationship with his deputy president Cyril Ramaphosa came to a head this month when the movement to recall Mr Zuma from the presidency gained momentum on the week he was due to deliver a key parliamentary speech.

The event was postponed as Mr Zuma and Mr Ramaphosa tried to thrash out a transition deal to ease out the embattled head of state.

During Zuma's time in power, South Africa was rocked by increasing social unrest over the failure to provide housing and basic services to the poorest in society.

Zuma is also still fighting a court order that could reinstate corruption charges against him over 783 alleged payments linked to a multi-billion dollar arms deal in the 1990s.