A tourist in Tanzania was captured on video foolishly reaching out of a safari vehicle to pat a lion.

The video, posted on YouTube last Friday (June 15), shows a tourist's arm reaching out from a window of the vehicle to touch the back of the wild animal.

While the lion was not seen immediately reacting to his touch, it was filmed moments later baring its fangs and roaring at the tourist through the window.

Panicking, the tourist then exclaims several times for his companion to "close the window".

The video, titled "Dumbest tourist ever", has since received more than 650,000 views on the streaming site.

In an interview with British newspaper The Sun, South African safari ranger Naas Smit said the lion "could have torn the arm off the person touching it". 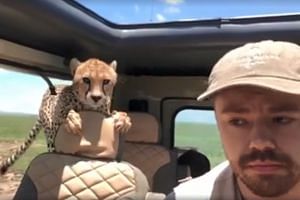 "It would have the power to pull that tourist straight out of that window and kill him instantly in front of his friends. It was an incredibly stupid thing to do," he said.

The ranger also added that the animal could have "easily crashed its way through the open window" to attack the passengers inside the safari vehicle.

"They were lucky to get away with it," he added.

In 2016, a tourist was mauled and killed by a tiger and another was seriously injured after they got out of their car while in a safari park in China.