NAIROBI (AFP) - A quarter of all premature deaths and diseases worldwide are due to manmade pollution and environmental damage, the United Nations said Wednesday (March 13) in a landmark report on the planet's parlous state.

Deadly smog-incuding emissions, chemicals polluting drinking water, and the accelerating destruction of ecosystems crucial to the livelihoods of billions of people are driving a worldwide epidemic that hampers the global economy, it warned.

The Global Environment Outlook (GEO) - a report six years in the making compiled by 250 scientists from 70 nations - depicts a growing chasm between rich and poor countries as rampant overconsumption, pollution and food waste in the developed world leads to hunger, poverty and disease elsewhere.

As greenhouse gas emissions continue to rise amid a preponderance of droughts, floods and superstorms made worse by climbing sea levels, there is a growing political consensus that climate change poses a future risk to billions.

World leaders in 2015 came up with the Paris climate deal, which saw each nation promise action to cut emissions in a bid to limit global temperature rises to 1.5 deg C.

But the health impacts of pollution, deforestation and the mechanised food-chain are less well understood. Nor is there any international agreement for the environment close to covering what the Paris accord does for climate.

The GEO compiles a litany of pollution-related health emergencies.

It said that poor environmental conditions "cause approximately 25 per cent of global disease and mortality" - around 9 million deaths in 2015 alone.

Lacking access to clean drinking supplies, 1.4 million people die each year from preventable diseases such as diarrhoea and parasites linked to pathogen-riddled water and poor sanitation.

Chemicals pumped into the seas cause "potentially multi-generational" adverse health effects, and land degradation through mega-farming and deforestation occurs in areas of Earth home to 3.2 billion people.

And the way Earth is set, unchecked use of antibiotics in food production will see drug-resistant superbugs become the world's number one cause of premature death by mid-century.

"Urgent action at an unprecedented scale is necessary to arrest and reverse this situation," said a note to policymakers accompanying the report.

Without a fundamental retooling of the global economy to more sustainable production lines, the report's authors warn that the very concept of GDP growth could become meaningless against the cost of lost lives, work hours and concomitant treatment expenses.

"If you have a healthy planet it supports not only global GDP but it also supports the lives of the very poorest because they depend on clean air and clean water," Joyeeta Gupta, GEO co-chair, told AFP.

"If you turn that around, an unhealthy system has massive damage on human lives."

The report called for a root-and-branch detoxifying of human behaviour, while insisting that the situation is not unassailable. 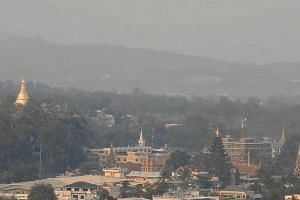 For instance food waste, which accounts for 9 per cent of global greenhouse gas emissions, could be slashed. The world currently throws away a third of all food produced. That figure is fuelled by 56 per cent of food in richer nations going to waste.

"Everyone is saying that by 2050 we have to feed 10 billion people, but that doesn't mean we have to double production," said Gupta.

"If we reduce our waste and perhaps have less meat you could immediately reduce that problem." At the same time, she acknowledged, "that would require changes in the way we live."

The report also called for a rapid drawdown in greenhouse gas emissions and pesticide use to improve air and water quality.

The GEO draws on hundreds of data sources to calculate the environmental impact on over a 100 diseases.

Its unveiling at the UN Environment Assembly in Nairobi is likely to add to the debate over who bears the greatest responsibility for the damage already borne by Earth.

China pollution sources up by more than half since 2010, environment official says

Cricket: Pollution stops play for about 20min on second day of India-Sri Lanka Test in Delhi

Sources close to the negotiations told AFP some developed nations, led by the United States, had threatened not to "welcome" the GEO report, a procedural but nonetheless significant hurdle if nations are to agree on the necessary cuts in waste, overconsumption and pollution.

Gupta said that nations, however big or small, would all have to adapt to the environmental reality facing every human on the planet.

"If you look at land, it's fixed," she said. "If the population is going to go up we have to redistribute, one way or the other.

"If you look at freshwater, it's more or less fixed. You have to end up sharing. This is a discourse that many developed countries don't like."