Security sources said at least 22 people were detained by police during "limited and sporadic protests" on Saturday at several metro stations by commuters demanding the price hikes be reversed.

They said most had been released, while three were ordered detained for 24 hours pending further investigation.

The government says higher fares are needed to keep the loss-making metro running and to finance new extensions being built to serve more of the capital city's 25 million people.

It has also committed to sharply reducing state subsidies as part of a 2016 loan deal with the International Monetary Fund, pushing up living costs for millions of Egyptians.

The price rises, which came into effect on Friday, saw the cost of some metro tickets tripled. 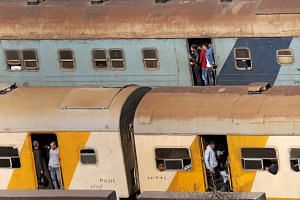 The government angered Cairo residents, more than three million of whom use the metro every day, when it doubled the price of many metro tickets last year.

Discounted rates will be maintained under the new system for students, the elderly, and those with special needs.

The metro system has accumulated losses of 618.6 million Egyptian pounds, according to state news agency MENA.

While there were no signs of fresh protests on Sunday, the first day of the work week in predominantly Muslim Egypt, the number of commuters during the morning rush hour appeared lower than in previous days, witnesses said.

Videos posted on social media on Saturday showed people jumping over ticket barriers at some stations. At others, dozens of protesters chanted slogans as police looked on.

A Reuters witness said police detained at least two people after scuffles at one of the stations.

Interior Ministry officials could not be reached for comment. It was not possible to verify the authenticity of the recordings.

Inflation shot up after Egypt devalued its currency in November 2016, reaching a record high in July on the back of energy subsidy cuts.

It then eased gradually until last month, when core inflation, which strips out volatile items like food, rose slightly.