JOHANNESBURG (REUTERS) - South African Archbishop Emeritus Desmond Tutu stepped down as an ambassador for Oxfam on Thursday (Feb 15), citing disappointment at the British aid agency's embroilment in a sex scandal involving staff in Haiti after a massive 2010 earthquake.

The 86-year-old Nobel Peace laureate pulled out of public life in 2010 due to his advancing years but had continued to represent Oxfam even in retirement.

"The Archbishop is deeply disappointed by allegations of immorality and possible criminality involving humanitarian workers linked to the charity," a statement from his office said.

Tutu was also saddened that the allegations would tarnish the good work achieved by many thousands of people working for Oxfam, it added.

The Times newspaper reported on Friday that some Oxfam staff paid for sex with prostitutes in Haiti after the country's 2010 earthquake.

Oxfam has neither confirmed nor denied that specific account but has said an internal investigation in 2011 confirmed sexual misconduct occurred, and it has apologised.

The charity is under threat of losing its British government funding over sexual misconduct accusations in Haiti and Chad. 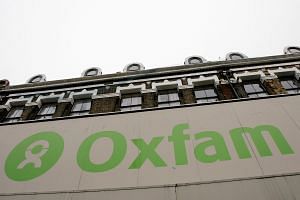 Senior staff have already left the charity. The former Haiti country director at the heart of the scandal denied on Thursday that he had paid for sex with prostitutes or abused minors.