CAPE TOWN (BLOOMBERG) - Cape Town, the South African city that threatened to turn off the taps this year as it confronted a water crisis, should clear thirsty alien trees as a cheaper alternative to building desalination plants or waste water recycling systems.

Removing non-indigenous trees from water catchment areas could add two months of water supply each year, according to research from the Nature Conservancy that the Arlington, Virginia-based organisation published in Cape Town on Friday (Nov 16).

Building desalination plants and wastewater recycling systems would cost on average 10 times more than rooting out invasive pine, acacia and eucalyptus trees, according to the study.

Cape Town came within 90 days of shutting off supplies and forcing residents to queue for water during a record drought caused by years of below-average rainfall.

While "Day Zero" was avoided, residents remain subject to severe restrictions that limit them to 70 litres each a day.

The US organisation's study found that 372 million rand (S$36.1 million) could fund a 30-year programme to clear invasive trees and prevent them from returning in seven catchment areas that provide 75 per cent of Cape Town's water.

In its first six years, the effort could yield an additional 56 billion litres, adding to the city's current annual supplies of 324 billion litres.

Dams supplying Cape Town were 72.9 per cent full as of Thursday, according to figures posted on the city's website. They dwindled well below 30 per cent before a recovery in rains during the May-August wet winter season swelled reservoirs. 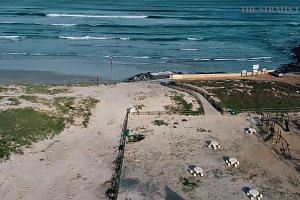 Climate of change: A close shave for Cape Town which averted a water crisis

'Day Zero' for dry taps in South Africa's Cape Town may not occur in 2018, says official

Here are some more key points from the Nature Conservancy's announcement:

- The study was designed to identify the most cost-effective solution, attract others to join the Cape Town Water Fund, and add to money raised so far

- Coca-Cola, PepsiCo, Caterpillar Foundation, and Levi Strauss & Co are among corporate supporters of the fund

- Work in the first six years of the programme will create an estimated 350 jobs, mostly on teams to clear the invasive plants

- The Nature Conservancy's research was conducted by Anchor Environmental Services and modelled various investments to increase water supplies to the city and its surroundings.