TOKYO (BLOOMBERG) - Sony Corp shares fell the most in two and a half years on Monday (Feb 4) after reporting slower growth in its PlayStation business and a cut in revenue forecasts for the year, becoming the latest big technology company to suffer from the slowing global economy.

The stock slumped as much as 8.6 per cent, the most since June 2016 on an intraday basis, after operating income in games fell 14 per cent to 73 billion yen (S$900 million) for the holiday quarter. The company sold 8.1 million PS4 consoles, compared with 9 million units a year ago. For total sales, Sony lowered its outlook to 8.5 trillion yen for the fiscal year through March, compared with the prior forecast for 8.7 trillion yen.

"We are moving to the sidelines until we can better assess the risks in the Games segment," Damian Thong, an analyst at Macquarie Group, wrote in a report after cutting his rating to neutral. "Strong profits from game software were offset by higher promotional and marketing costs aimed at driving PS4 volumes."

Weaker demand for camera chips, mobile handsets and financial services were behind the revision although a tax adjustment will boost net income, the Tokyo-based company said in a statement Friday.

Sony's results underscore the struggle at big technology companies, which are seeing slowing demand for their products and services. Apple Inc reported a decline in revenue for the first time in two years, while chipmakers Intel Corp and Nvidia Corp have warned of weaker sales as China's economy starts to sputter and looming uncertainly over Brexit.

"It's definitely not as positive as the headline numbers would suggest. It feels slightly negative overall," said Andrew Jackson, head of Japanese equities at Soochow CSSD Capital Markets in Singapore.

Operating profit in the last three months of 2018 was 377 billion yen, compared with analysts' projection for 365 billion yen. After adjusting for a one-time gain in the music business, the result was significantly lower, at 260 billion yen. Quarterly sales fell 10 per cent to 2.4 trillion yen. 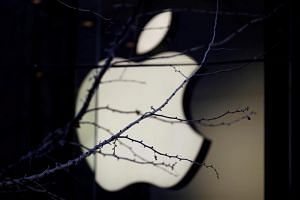 With fewer games in store for the already-aging PlayStation 4 and Sony's own Xperia phone business still bleeding money, Chief Executive Officer Kenichiro Yoshida will have to prove that Sony's turnaround can continue instead of peaking this year. The mobile division continued to struggle, with an operating loss of 15.5 billion yen during the quarter, the fourth straight period. Mr Yoshida has so far rebuffed pressure to sell off the unit, saying it is vital for pushing innovation including 5G-related research.

"The market is closely watching for a turnaround in the mobile communications business, but it looks things are worse year-on-year due to a decrease in smartphone unit sales," Mr Jackson said.

For the current fiscal year, operating profit will be 870 billion yen, compared with analysts' projections for 884 billion yen on average, according to estimates compiled by Bloomberg.

The PS4, headed for its sixth year, will likely surpass the 100 million unit sales milestone by mid-2019, cementing it as one of the best-selling consoles in history. But this year's software lineup is smaller than the record-setting 2018, which saw first-party blockbusters God of War and Spider-Man and third-party hits like Red Dead Redemption 2.

This year is mostly focused on a pair of zombie titles, the lesser-known Days Gone scheduled for April and a sequel to the award-winning The Last of Us likely released later this year. For the full fiscal year, Sony kept its forecast for the games division of 310 billion yen.

Sony's camera chips business is also seeing an impact from slowing global demand for smartphones. Operating profit in chips fell 23 per cent to 46.5 billion yen. Guidance for the division is now lower, at 130 billion yen for the current fiscal year, from October's forecast of 140 billion yen.

"We are cautious but not overly worried about CMOS despite iPhone weakness," Atul Goyal, an analyst at Jefferies, wrote in a report last week.

The company's new 48-megapixel image sensor is proving to be a hit with manufacturers including Xiaomi and Huawei, who are promoting it as a key feature in their new models. Phones with at least two rear-facing cameras will account for 74 per cent of the market by 2020, up from 29 per cent this year, JPMorgan Chase & Co predicted in a research report this month.