SAN FRANCISCO - Apple has updated its smartwatch series with a slew of models. Simply known as Apple Watch series 2, it features built-in GPS and much better water resistance.

Thus, fitness enthusiasts can go running with the new Apple Watch to get GPS distance tracking without the need to be paired with an iPhone

It is also water resistant down to 50m and can track users’ swimming workouts.

Other improvements include a better dual-core processor, as well as a graphics processing unit that is twice faster than its predecessor. It will also be available in new a ceramic case. 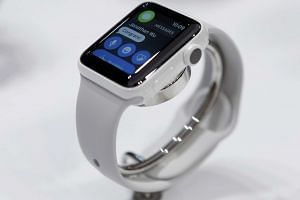 At 1,000 nits, the new Apple Watch’s display is brightest display that Apple has ever shipped, said Apple’s chief operating officer Jeff Williams during the presentation at Bill Graham Civic Auditorium.

In addition, Apple Watch Nike+ has been announced. It is essentially Apple Watch series 2 but with a running focus allowing users to get running easily and integration with Nike+ Run Club