It may soon be possible to use SingPass to verify a person's age to buy alcohol from vending machines, even as the Government plans to make the national identification system a common tool to authenticate digital sign-ins.

In the second or third quarter, fintech company Ascan plans to launch a new feature in vending machines that allows customers to buy alcoholic beverages using SingPass, instead of a physical NRIC at shops, to confirm that they are at least 18 years old - the legal drinking age here.

They will be able to do this by using the SingPass mobile app to scan a QR code on a vending machine, and then verifying their identity with the app by keying in their six-digit app passcode, or scanning their fingerprint or face.

Once they agree to let SingPass send details of their date of birth and their age has been verified, they can select the alcoholic beverage they want to buy.

The verification step is similar to that for using SingPass to access government e-services, like applying for public housing. But users must first do a one-time set-up for the app using their SingPass username and password.

The vending machine example was one of several new ways of using SingPass that the Government Technology Agency (GovTech) showcased yesterday as it launched a new logo for SingPass, the first in 18 years since the service was introduced in 2003.

GovTech, which developed SingPass, said that at the heart of this rebranding is delivering an "even better SingPass that offers new features and provides convenient access to a larger range of services".

Transactions facilitated by SingPass last year doubled to over 170 million, as more people turned to digital transactions during the pandemic, said GovTech.

The identification system now powers more than 1,400 services offered by about 140 public and 200 private sector organisations.

The number of people using the SingPass app also tripled in the past year to 2.5 million.

The agency added that SingPass has "played an important role in the fight against Covid-19" and has supported pandemic contact tracing efforts with SafeEntry check-ins through the SingPass app.

It is not a stretch to imagine that (SingPass) will eventually evolve into an international digital identity or... passport.

MINISTER-IN-CHARGE OF THE SMART NATION INITIATIVE VIVIAN BALAKRISHNAN, on how SingPass could be used in future. Singapore is in talks with Australia and Britain on developing such a digital passport, although this is still some years away from being ready, said Mr Kwok Quek Sin, GovTech's senior director for national digital identity. 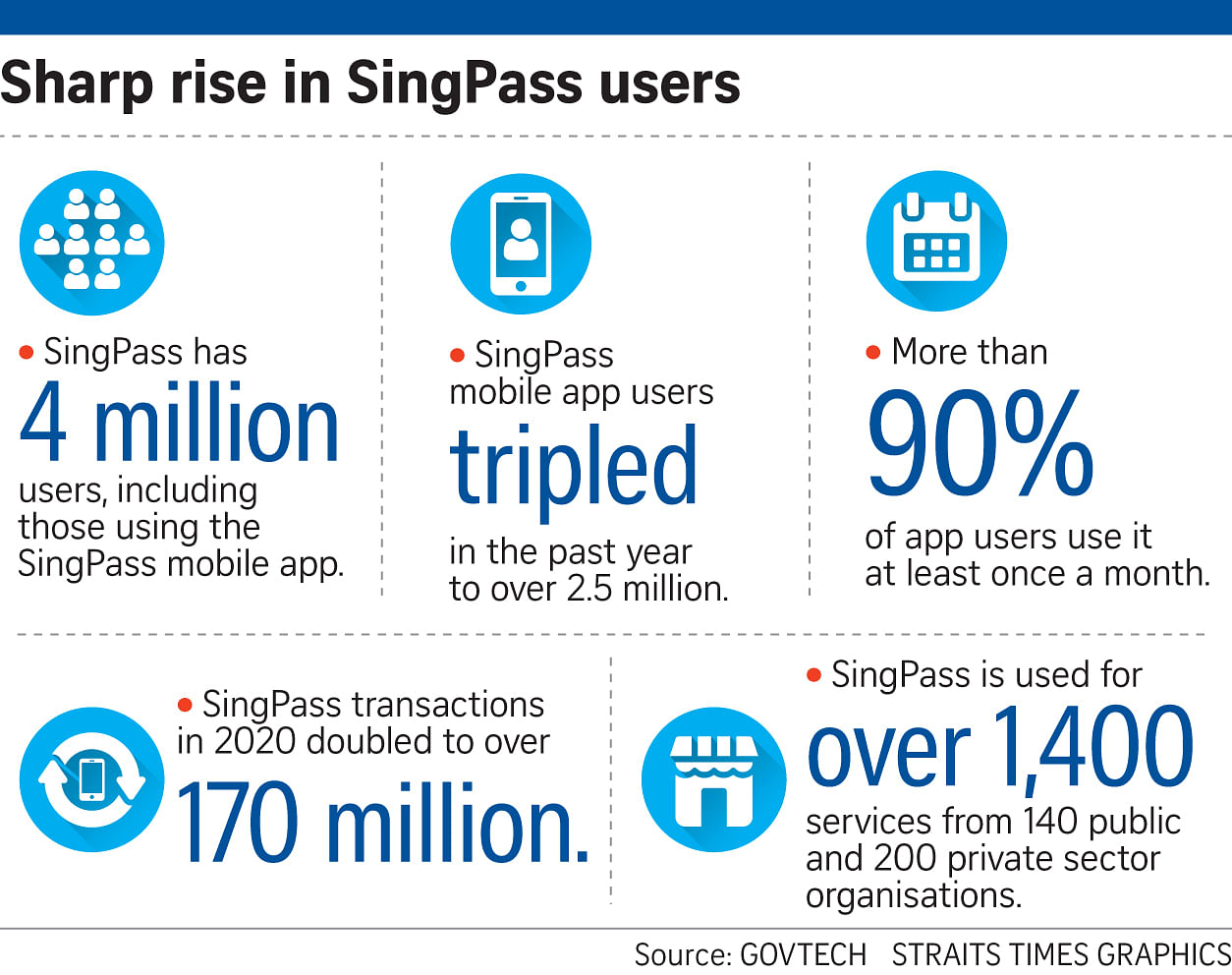 In the past three years, more than 10 features have been added to SingPass.

These include the launch of the SingPass app in 2018 and upgrading SingPass to the digital equivalent of the NRIC. So, in some cases, the SingPass app can replace the physical NRIC to verify a person's identity, or reduce the need to fill in personal details with forms.

Many organisations have used this feature to help cut down on paperwork for customers.

For example, Ray of Hope, a crowdfunding platform for charity, said it has used SingPass to verify the identities of people who want to start fund-raising campaigns. Since it started using this verification process at the beginning of last month, it has cut 40 per cent to 50 per cent of the paperwork.

GovTech said organisations in the real estate, healthcare, finance, auto and training sectors have also expressed interest to use SingPass verification to simplify face-to-face registration. This could be done over counters that are unmanned or have support staff.

SingPass can also be used for two-factor authentication by scanning a person's face, and for letting users securely sign legal and business documents virtually without having to be physically present.

Minister-in-charge of the Smart Nation Initiative Vivian Balakrishnan said at the SingPass rebranding event yesterday that with all the features built into SingPass, "it is not a stretch to imagine that (SingPass) will eventually evolve into an international digital identity or... passport".

Work has already started on this.

Singapore is in talks with Australia and Britain on developing such a digital passport, although this is still some years away from being ready, said Mr Kwok Quek Sin, GovTech's senior director for national digital identity.

A version of this article appeared in the print edition of The Straits Times on March 05, 2021, with the headline 'SingPass may soon be used to verify age to buy alcohol at machines'. Subscribe
Topics:
More
Whatsapp Linkedin FB Messenger Telegram Reddit WeChat Pinterest Print Purchase Article Copy permalink