Workers in Singapore are feeling more burnt out compared with their peers globally, and this could be driven partly by their digital workloads rising amid the pandemic.

About one in two workers, or 49 per cent, feels exhausted, while 58 per cent feel overworked, according to an online poll in January of more than 1,000 workers here.

The study, called the 2021 Work Trend Index, was commissioned by the American technology giant.

Ms Joanna Lim, Microsoft Singapore's modern work and security business group lead, said the burnout here could be due to working from home blurring people's work and family lives, and their digital work intensity rising during the Covid-19 outbreak.

While Singapore's figures were not available, global data from Microsoft 365, the company's suite of online productivity tools, found that in February, compared with a year ago, people's time spent in online meetings jumped by 2.5 times.

"Employees find themselves stuck in this vicious circle of waking up, doing work, (attending) back-to-back meetings, and then working overtime," said Ms Lim. "It can feel that the tunnel is endless, with no distinct separation between work and life."

Mr Alvin Goh, executive director of the Singapore Human Resources Institute, said burnout is worse for workers who are caregivers and parents with children who do home-based learning.

"Technically, Singaporeans have been in 'lockdown' since April 7 last year without the usual escape to other countries, so the 'on-screen' mode that we have been operating in... is real and leads to burnout," said Mr Goh, referring to the two-month circuit breaker that kicked in on that date. 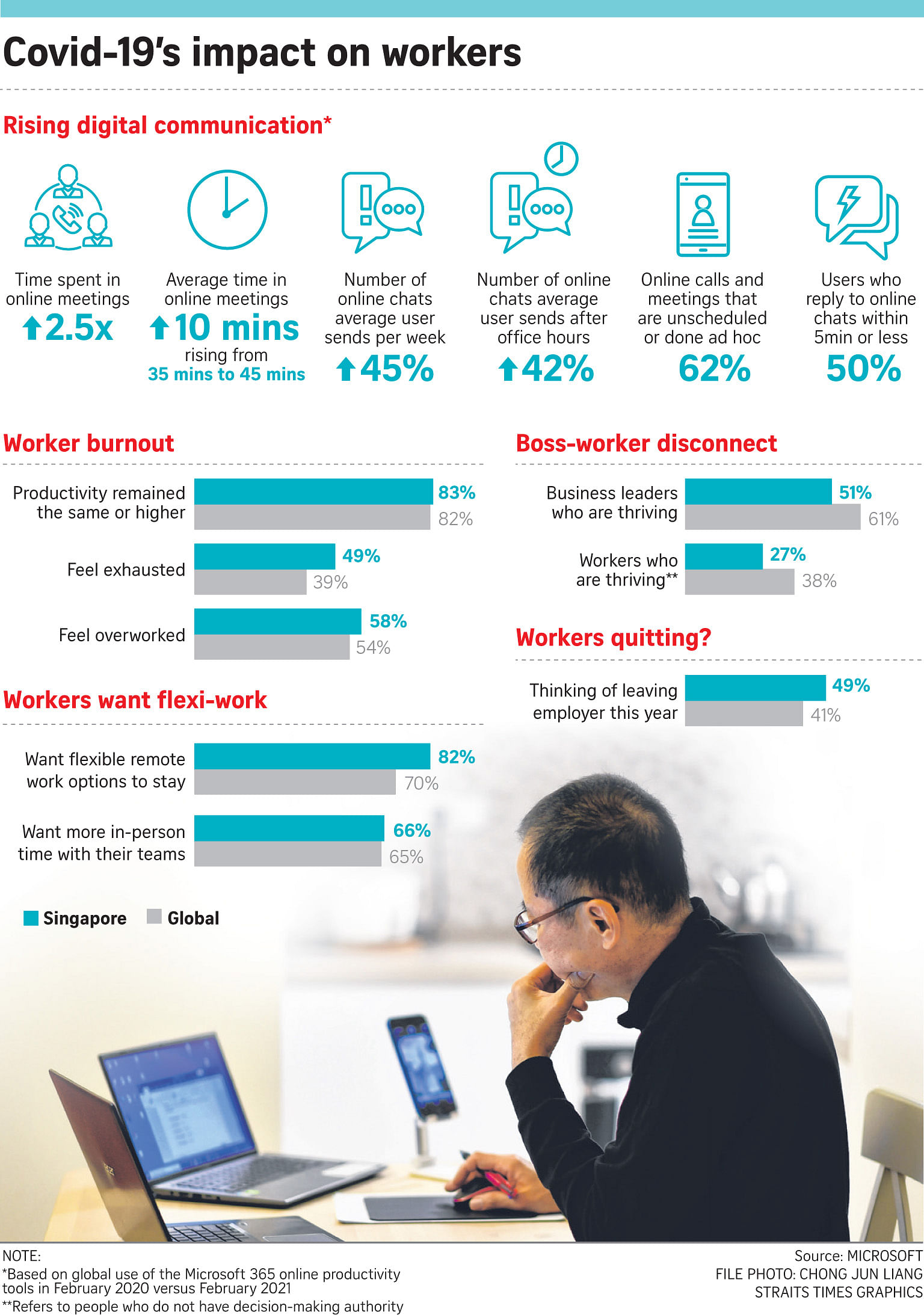 One problem is that people working remotely have no face-to-face interactions and connections to soften this.

Ms Lim said that without meeting employees in person, it is more difficult for bosses to pick up cues on how workers are faring and what they are feeling.

This, she believes, contributed to the survey's finding that bosses here are out of touch with workers.

The poll found that 51 per cent of business leaders here say they are thriving, but only 27 per cent of workers feel this way.

Mr Goh added: "We also appear to be in a rush to get from one virtual meeting to another these days, rather than listening to what is really happening on the ground."

Microsoft said overwork, exhaustion and the disconnect between bosses and workers may explain why almost 49 per cent of workers polled are considering leaving their employer this year.

This is also higher than the global average of 41 per cent, despite the pandemic casting uncertainty over the economy and job security.

Ms Lim said other reasons for this could, however, be linked to new job opportunities opening, as well as people rethinking their priorities.

Mr Goh said there is still uncertainty but compared with a year ago, the job market seems to be picking up for certain sectors and roles. Demand has grown for software developers or engineers, project managers, and change and transformation specialists.

"It is also important for employers and leaders to respect employees' personal time and adopt, if necessary, flexible work arrangements to cater to different needs of the workforce," he said.

Microsoft said combating digital exhaustion needs to be a priority for leaders. They could consider how to reduce employee workloads, as well as create a culture where breaks are encouraged and respected.

It said bosses must consider how to equip workers working from home and in the workplace with the tools they need to contribute.

Workplaces could be redesigned to create areas conducive for workers at home and in the office to collaborate.

As for workers, Mr Goh said they need to realise that going "off-screen" is "perfectly all right", and they can take short breaks when working from home.

"Though these might not immediately address the ongoing issues, they will at least slow down the burnout rate and possibly address... issues such as employees being exhausted," he said.